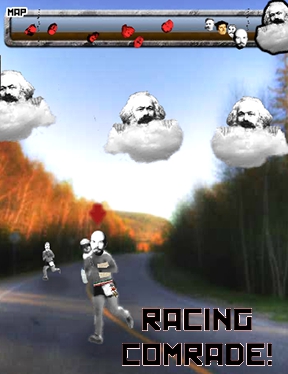 Comrades! Muscovites! Country-proletariat! Lend me your cursors! Now is the time to prove that you are more equal than others!
Our dear frozen-dessert-in-arms Ice Cream Breakfast has released Racing Comrade for the demonstration of your socialist prowess! You must sprint, kick, and bribe your way to athletic glory! Refusal to use exclamation points is counterrevolutionary!

The game is entirely mouse controlled. What you can do in a race depends completely on what upgrade you've purchased. At first, you're limited to some basic improvements, like faster running and the ability to salute the officials. But sign a minor contract (and don't bother reading it, I mean, what could go wrong?), and you'll unlock a number of more devious upgrades, such as contraband to collect on the race course and the ability to kick, bite, taunt, and even shiv your competitors. Within the race itself, you'll have various action buttons which reload over time and can affect each other. You won't be able to sprint for a while while you're catching your breath, and biting your opponent will delay your ability to kick them. Most of these actions also cost stamina, which is measured in a bar at the left side of the screen. Lastly, the weather affects the outcome of the race. In the fog, for instance, everyone goes slower, but you'll slowly recover stamina as you run, and officials won't be able to see anything you do, good or bad. 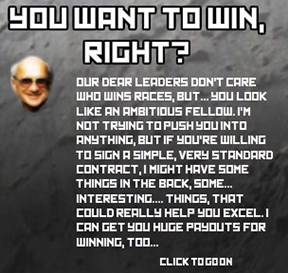 Analysis: Racing Comrade takes a refreshingly detached approach to the racing genre. The developer claims inspiration from the fighting in World of Warcraft. Rather than requiring you to hammer away at arrow keys, your little Lenin-headed racer just plugs along while you wait for the opportunity to make him take some special action. It winds up making you feel more like a coach or even a puppeteer. The reloading periods for actions are sufficiently long that you never feel too rushed or frantic, and in fact, the game could almost be called relaxing. The repetitive propaganda music playing in the background certainly has a hypnotic effect on me.

The game's art and humor have a Pythonesque quality; the floating Marx heads in the clouds which serve as the game's officials could indeed have dropped directly out of a Terry Gilliam sketch. Your Lenin character is racing against numerous other historical figures cut and pasted over figures in skimpy running shorts. If you lose the race, the winner offers up some appropriate remark, such as Comrade Franklin suggesting you blame Hoover and Comrade Hegel suggesting the result was historically inevitable.

This turns out to be a game that is almost as good of an idea as the developer's handle, Ice Cream Breakfast. Grab a bowl of rocky road or double chocolate chip some morning and double your pleasure and/or fun by accompanying it with this game.

Like most games of this kind, if you just keep plugging away, you'll eventually earn enough cash to buy enough upgrades that you can't help but overwhelm your opponents. But if you want to speed things up, here are my tips.

Like most games of this kind, if you just keep plugging away, you'll eventually earn enough cash to buy enough upgrades that you can't help but overwhelm your opponents. But if you want to speed things up, here are my tips.

I like how the picture of the review presents a typical race: You in first place, and six other contestants who stopped running.

This is the best game xD Totally agree with joye's tips:

I beat it with a combo of taunting, judge distracting, and shivving. I bought all of the other attacks, but they were mostly useless.

Well, as long as you flip the bird or call in a moment of reflection, sprinting and collecting food while kicking anyone who gets in your way, it's just as possible to win without killing anybody :3

But I like shivving my comrades! I offed three in one race!

Unfortunately, shivving costs quite a bit of energy, and if you knock them out for 15 seconds, they're usually out of the race anyway.

A description of one of my races:
*race starts*
*I kill someone*
*I kill another person*
*I kill a bunch more people and win*
I like Shiv. A lot.