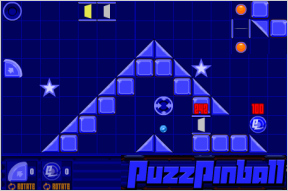 Wait a second. Pinball isn't supposed to be hard, is it? With PuzzPinball you're given control over placing the flippers, bumpers and ramps — not bouncing the ball whenever it comes near. It turns a game of reflexes into a game of thinking and will probably catch you by surprise with its ability to draw you in.

Just like any "editing" game such as Rubicon, Launchball, Eets, or Armadillo Run, you start each level of PuzzPinball with the action frozen and the pieces lined up at the bottom waiting to be placed. Click on an item and place it on the grid, rotating with the icons if necessary. The goal is to bounce, blow and roll the pinball across the stage to collect stars and points before guiding it to the exit. When you're ready to go, click "start" and watch what happens. You can always reset the action and move pieces to tweak the setup, which you'll be doing many times for each stage.

The most intruiging part of PuzzPinball is the game's level of unpredictability. It takes some time before you get a feel for what the ball will do when it hits the items you place. Will this bouncer send it over the blocks or under them? Does this ramp leave the ball with enough momentum to make it to the blower? It adds a little excitement not knowing just what will happen, letting you experiment and gradually master the game's physics.

Analysis: A simple handful of dark colors is all PuzzPinball needs to create its almost futuristic look. While the palette of blues does get a bit bland after a while, it makes running the ball through gates (which flash orange or yellow) even more satisfying. The only sounds are the clicks and pings you'd normally hear from a pinball game, but for some reason they're remarkably satisfying. Maybe I'm just hard-wired to feel good when a pinball game goes right?

Unique but familiar, PuzzPinball is an excellent marriage of a retro game with a great new puzzle interface.

Wow. quite fun, but I hate how you have choose to either rack up tons of points by getting it right first time or spend hours perfecting the points on every level. looks very polished, but everything felt like it... muffled the ball's speed too much, and gravity was a bit too much. very polished though, I found no bugs in the first several levels and it all ran smoothly even at high quality on my despisable PC.

Finished! I took the route of trying to turn on every orange button. Its only fault is that it left me wanting more.

Very unique and interesting game. Wish it would play more like pinball or Pachinko. The design of 'what to place where' is excellent. But the replay speed needs to be picked up quite a bit.

I liked the fundamental idea, even though it is an "Incredible Machine" derivative. The implementation is excellent, making it very quick and easy to stop, move or rotate elements, and restart.

The pinball sounds are first class and extremely effective.

I'd question the level design. Round about level 5 or 6 I found it impossible to apply any logic to finding a solution, reducing my interest greatly. Sorry to be less than 100% positive.

Level 6 has been giving me a more than hard time - but so far I like this game.

Forgot to mention: the ability to skip levels unfinished is a great option.

Oops, a minor bug. The ball hit the round spring that was placed in the corner and stuck to it - and the pint counter keeps going up like hell. If i wait for 10 minutes and then retry it I'll sure have an unbeatable highscore :)))

I'll stop posting screenshots I promise, but I can't not show you where my dirty little ball could stop...

Yeah, the same thing happened to me a few times -- but at least in my experience, it wasn't possible to make the score "stick," so it didn't strike me as a major bug. If you don't manage to get the ball to the goal, the additions to your score are only temporary and will go away when you retry.

Speaking of screenshots, I thought I'd share one from level 17. This clearly isn't the "intended" solution (notice how I didn't use three of the parts), but it does eventually succeed in lighting up all of the orange targets and hitting all but one of the stars. What's amusing is the amount of rebounding that goes on before this happens!

Oops, sorry, that link is http://drumz.best.vwh.net/level17.gif

Has anyone gotten anywhere with level 18? Based on the board layout, I think I've figured out that you need to avoid at least one of the pairs of black holes on this one (whereas in the earlier levels you've always used them to assist), but the way they're placed right next to the targets makes that really evil. I seem to keep getting caught in infinite loops...

one bug i found. sometimes your inventory will drop items. leaving you with not enough pieces to solve the level. it usually happens if you are trying a lot of different configurations for a level. somewhere along the way it will drop a piece you need.

Yeah, I've noticed that also a few times, most recently when I was getting within sight of solving level 18. Frustrating, because I can't find any way to fix it when it happens, short of reloading the game and starting from scratch. I may need to start capturing screenshots for easier duplication of my past efforts when this happens! Hope it can be fixed at some point.

Isn't there a 'go forward' and a 'go back' levels buttons? you could just skip the level then go back to it and presumably get all your peices back. then again, I might be completly wrong, but if you're not going for a high score I suppose you could always just skip the level.

I've experimented with this a bit, but going forward and back doesn't ever seem to return the missing pieces. (The game remembers the state of your most recent effort on each level, which is normally a very helpful thing, but not where this bug is concerned.) Also, the "skip" option isn't always available -- I haven't figured out what conditions need to be met for that -- so you most often do seem to have to replay when you reload.

Another minor nit is that you can always get the maximum 1000-point time bonus simply by replaying the level right after you find the solution, so it kinda loses its meaning.

When everything is working as intended, I find this thing nearly perfect as puzzlers go, though there are still a few levels in which I despair of ever being able to hit every target.

Is it possible to get hit all the stars in all levels?

I started playing this game and I'm obsessively trying to hit all 3 stars on level 1. I know it isn't required, but I wonder if it is possible.

It's definitely possible to hit all three stars on level 1. Don't overthink it!

I'm still stuck on level 18, but I've hit all targets on every level before that except 4 and 13. I assume 4 is possible, though I have serious doubts about 13.

I've created screenshots of all the levels so far in which I've been able to hit every target (again, that's 1 through 17, with the exception of 4 and 14). You can find the combined image here:

It's a large image, so you may need to zoom it in your browser to see enough detail.

w00t! Just now stumbled upon a somewhat goofy but effective solution for level 4.

I'm also particularly amused by my final (?) solution to level 17 (see the "solutions.gif" link above), which is much better than the one I posted yesterday. Just when you're convinced that the ball is stuck in an infinite loop and will never reach the goal, it does, after 85 seconds of bouncing around and 10,468 level points. :) Whee, fun.

Okay, giving up at 18 for now. I've gotten closer and don't want to skip it on general principle, but I keep getting hit by the vanishing-piece bug, and it's getting just too annoying.

Still, nice game. If the developers can fix that one glaring bug, it'll be nearly perfect.

Yeah, hate to be a negative nancy here, but the game needs some major work.

There are several major bugs that need to be ironed out, including the vanishing-piece bug, also sometimes the game doesn't record scores.

Then there was the problem that the items that you can place are the exact same color as the ones you can't, which meant I was always losing track of the pieces as I had to shuffle them around the board. Yes, the graphics are supposed to be simplistic, I understand that, but it's still irritating.

The sound effects are excellently done, but there's not enough variety between them, so after a while they're just irritating.

But those are all little things. My main problem is what John239 talked about, and a far too frequent problem in physics-based "editing" games: The effect that each of the pieces has on the ball's trajectory is so incredibly dependent on space and context that it becomes almost random, which makes it pretty much impossible to apply any logic at all to the solution. Most of my solves past level 6 were almost entirely guesswork.

Then again, perhaps I should stick to non-physics based editing puzzles (tChu is a personal fave) and let games like this frustrate others as much as they want, somewhere far away from me.

I'm about to find out what happens when the point number gets too big for the game to handle....

On Level 3, Put the point thing directly below the ball entrance.

link's not working at present; giving me an apache error

Thanks, it's fixed now. They must have moved the game, as many sites seem to want to do from time to time. =/