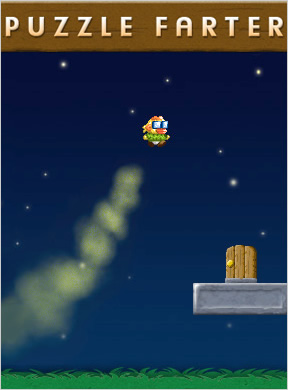 Nobody walks anymore. Everybody wants to run or jump, or to launch themselves from platforms using various devices. (You know, chains, trails of slime... whatever is handy.) Of course, with all the wall spikes around, and dangerous monsters wandering about, who can blame them? With so many clever ways to avoid losing their precious lives, no one has ever attempted to harness the magical effect that occurs when one eats a giant plate of beans. That is, until now. Meet the Puzzle Farter.

Clad in protective goggles, he conquers levels in the usual fashion, by the command of the [arrow] keys. In the first scene, the cute and calm environment gives you an opportunity to try out his special talent. Press [up] to make the farter jump. Then, before he returns to the ground, press [up] again and he will fly through the air on a cloud of hyper-colic gas. Once you have control of his farting power, direct him towards the little closed door, where 49 more levels of adventure await. 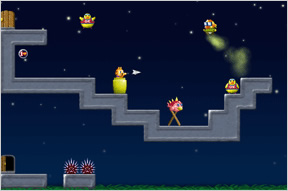 The physics in Puzzle Farter are elegant, yet difficult to master. One fart will only get you so far or so high, and it takes a moment for his gas to recharge. Trying to hurry along will give you a series of short toots, and leave our hero sitting in a cloud of his own gas. (No wonder he wears the goggles.) By the same token, a short blast is sometimes all you need, especially if you're looking for a little extra boost at the end of a long jump.

As the levels progress, they become increasingly difficult. Touching a monster, who seem to be immune to your stinky gas, or running into one of the many spiky walls will take away a precious health star. When your three stars are gone, you'll lose a life. While you begin the game with only three lives, there are 13 "1-ups" scattered throughout the levels. In order to reach the end, you'll need to summon all your timing and patience.

For some, this game will be difficult and frustrating, while others are just born flatulent. Yet, it isn't necessarily the challenge that makes this game so endearing. The graphics are simple, yet adorable. The enemies are almost too cute to fear: prehistoric-looking birds, ducks performing jumping jacks, and frogs whose extended tongues can support your weight. But, best of all are the sounds of the Puzzle Farter's biological thrusters, varying from polite little toots to ripping a big one. Playing with the sound on is a must (unless you're at the office or Grandma's house, or you just want to pretend he has an invisible jet-pack.)

This fun little platformer is the first independent flash game for the development group Pet Tomato. (Previously, they've just made kitschy little games for Cartoon Network.) For a first of anything, Puzzle Farter is beautiful. What the game lacks in music or plot, it makes up for with simple charm and giggles. I hope we'll see more from Pet Tomato in the future. At least for now, we have 50 levels of farting goodness to enjoy. So, toss out the Gas-X and go with the flow, and enjoy playing Puzzle Farter.

Cheers to Austin, Julian, Uberknarf, and Lycia for suggesting this one! =)

Boo games with no infinite lives or level selectors :( It makes it hard to stay casual.

I got through the game with 3 lives and one star remaining. Great little game and fun to boot.

Not too bad, though the lack of sound control was irritating.

I dont like games where you always have to completly start over therefore no further play after the first gameover for me. Otherwise its original.

I like this game - though I'm scared I will die, and just won't play it again (I'm half way through now)

A little bug / cheat that I have found that may help:

If you die on a level with a 1up, the 1up respawns too, so if you are low on health on one of these levels, just die, and you will go back to full health and be able to keep your life...bit silly...

sucks, not a puzller as the name suggests, just an anoying unforgiving not side scrolling platformer based on juvenile humor

rex mario, IMHO platformers are a type of puzzle game, in many people's books. Juvenile humor? Well, considering most of us never grew out of that juvenile phase of life where we love playing video games enough to read this blog every day, I'd say for most people (who have at least a little bit of a sense of humor) the mere idea of this game is hilarious.

How could you write a review of this game without constantly cracking up?

Had anybody else problems loading the gane with FF?
I only managed to play it with IE...

Also I had difficulties with the controls, for some reason, the game sometimes didn't realize I lifted my finger from the Left-,Right- or Top-Arrow, resulting in uncontrollable movement and loss of many lives.

The idea and the sounds are still great though.

Where is the NSFW sign? I just cleared out the public library.

Normally I hate it when games don't let you start from where you left off. In this case, I'll forgive that since I couldn't help cracking up!

It would be nice to have a little fart-o-meter of sorts, to show you when your "battery" was recharged.

Hi, Thanks for the review and the comments! It's so nice.

Gloegg, I'm not aware of any FF issues. Do you have the latest Flash plugin? I'm sorry we don't indicate that Flash 9 is required.

Regarding the comments about continuing, we are going to add a save game feature to the next version. Sorry about that.

great game. took me 2 tries to make it all the way through though. it'd be nice if there was a save points or something. Every 10 lvls or even just a halfway save point would have been better

side note, i had no problem running it on firefox, in Ubuntu 7.10 x64 with flash drivers wrapped from x86.

actually, i just got flash working in linux on *almost* all pages, and i came here to test games. thnx <3

When I would get into a difficult maneuver and try to concentrate, ole PF would rip a tune I hadn't heard before and I'd break out laughing.

I think it would be an asset if it had a level selector, showing levels completed. Even a really funny joke begins to loses its power after you've heard it the 3rd time. Being able to quit and return to the place you left off at would help to keep it (for lack of a better word) fresh. I'm not so sure I'd take the time to complete all the levels otherwise.

I also think it might have been better to name it something less obvious like "Gas Powered", and leave the humor to be discovered in the course of gameplay.

I didn't mind the lack of ability to continue too much. It reminded me of old-school games where you paid a quarter to play, and milked it for all it was worth. It was always so rewarding if you could actually reach the end. I think we're a little spoiled these days with all these unlimited lives.

Oh, and 4red3s--I thought with a title like "Puzzle Farter", the NSFW status went without saying. Hopefully the librarians aren't too peeved at you!

@sometimes regular
at home I have exactly the same configuration (ubuntu 7.10 x64 with x86 flash / ff2) and it finally works without the control problems!

Now, with working controls, I had no problem finishing the game at once.

I had a massive brain fart and missed the obvious.

I usually rely on the start up music to let me know how HIGH the volume is and adjust accordingly. I pressed the UP button the first time he jumped but no sound. Of course when I hit it the second time THEN I found out where the volume level was along with several patrons around me who didn't believe me when I said it was my computer.

I just beat it, and I have to say... I loved the win game screen! Short and to the point and a quick boot to the main start screen. lol

I can't get behind a casual game that makes yous start all the way from the beginning if you lose all lives. Not in this day and age.

this game has kept me giggling long enough that my coworkers are starting to move their desks away from me.... tootin good time

what comes to mind when i play this:

Colonel: He also attacks by farting. He can fart to fly around too.
Snake: By farting?! Are you kidding me?!
Colonel: Sadly no, I am not kidding. If his belly starts to bulge, watch out.

That was Snake's Wario codec from SSBB if you didn't know. Very interesting game, although a bit hard for me at times.

Anybody notice that if you press down...

He rips his pants,but its only for a humorous effect,it doesen't even make him dodge.

Some people just don't enjoy this sort of humor. I'm still a "juvinile", and I really don't find this funny.