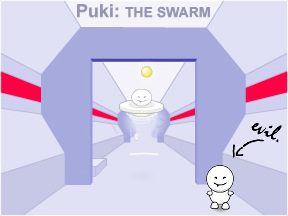 Flash-in-the-Can 2005 award winner, Grant Skinner, has put together an impressive and ambitious pseudo-3D first-person shooter in Flash. There is even a back-story in case you need a reason to shoot at cute little creatures.

Puki: The Swarm begins after a routine mission to a space station, in a far away place, where you pick up a cute and harmless little creature called a "Puki". However, after exposure to harmful gamma radiation, the Puki begin to reproduce rapidly, develop teeth and a taste for blood. Being that it's your ship, and you got yourself into this mess, you must now deal with the inevitable cleansing that must take place. It's either them or you.

Use the mouse for aiming the cross-hairs at the little darlings, click to shoot. Use the keys [A] and [D] for stepping left or right, [W] to run forward, [S] to slow down. Press [shift] to crouch and pick up items, press [space] for an emergency shield.

Oh, and about your laser gun. It heats up with every shot, so be careful not to overheat it, as it will take some time to cool. Fair warning.

Analysis: Puki: The Swarm delivers the 3D goods with a style that is as unique as it is humorous. The game's presentation is nicely polished with an interface that is simple to use and effective. The controls are tight and responsive, which makes aiming and firing the laser quite satisfying. The gameplay benefits from the decision to limit the shots fired with an overheating mechanism, thus making this shooter more than just gratuitous violence against cute cuddly toys. And if that weren't enough, bonus stages, power-ups, force fields and emergency shields keep the gameplay feeling fresh and exciting for more levels than you'll be able to finish. Click.

Caution: may not be appropriate for all age groups. Contains graphic violence against cuddly toys.

Robert - lol you so funny! Good to hear from you, friend. =)

Amazing. Very cool. Love that storyline! And his name is Grant too.

its a cool game to play, but its too hard on an AZERTY keyboard you cant move properly.

Great game. I suck at it, though...shooting cute little creatures...e_e

Hm...shooting cute little creatures. Oh well, at least its not fluffy bunnies with spears like in Ferry Halim's Bungee Bear.