Proteus is an exploration-based piece of interactive art by Ed Key and David Kanaga. In it, players take a walk through an abstract procedurally-developed island as relaxing harmonies play and react to your movement. After winning a smattering of gaming conference awards and a nearly year long beta-testing period, Proteus has finally gone gold! 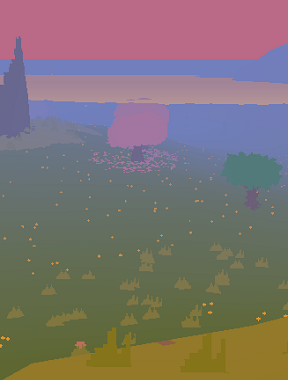 The basic gameplay of Proteus is simple movement and observation. The default controls will use [WASD] to move around with inverted y-axis mouse controls to look around, but it's best to take a trip to the options menu before starting and decide what you'd find comfortable. After that, travel to the island and get exploring. Also note that Proteus is a game where having the sound on is a must.

Analysis: It's always a curious thing when art tries to capture the beauty of nature. Life and experience is impermanent, which is why some artists try to immortalize it in a a painting or a symphony or a game. Clearly something will always be lacking if all these works do is try to directly recreate the dimensions of a flower. However, it's hard to deny that it is possible to capture something of the essence of nature in art. Proteus offers the essence of a visit to an island that never was, and may never be, and it offers it beautifully and without pretension. 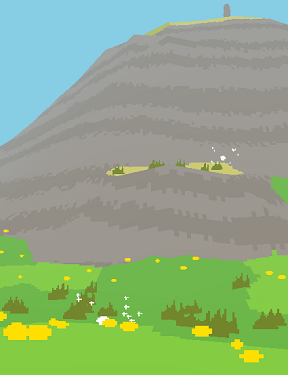 The world of Proteus is generated for each user, so this reviewer can only speak for his own island, but man, it was awesome to explore. It started as just a hazy image on the horizon of the sea. Approaching it, the blurs form into trees and flowers and cliffs. After pausing on the sand to troll a group of drum-beating crabs, I ran through a a field of pixelated cherry trees, the chirps of chiptune notes and chords sounding as I collided with the falling blossoms of spring. There was a green creature there who leaped away at my approach, and after following him for a while, he led me to a path that ended at a cabin. By this time, night had fallen, so I climbed to the peak of nearest mountain to get a look at the land surrounding me. This turned out to be the perfect place to view a meteor shower, and to see the clouds of the rainstorm that had traveled to the far side of the island, the sound of its droplets plinking against the ground barely audible over the soft winds of the peak. Sunrise came quickly, and I spotted pieces of light swirling near a circle of stones. I walked there (accidentally interrupting a flock of chickens, who dispersed to the sounds of an organ grinding), and upon my arrival the world began to spin, sounds and colors blended into each other. Then it was summer. I had barely scratched the surface and I wanted more.

In Space Quest IV, one of the boxes Roger Wilco finds in the Galaxy Galleria's Radio Shock describes a game that lets you "wander through" a world with "no other characters, no conflict, no puzzles, no chance of dying, and no interface." In context, this was a send-up of Lucas Arts' Loom, but it's actually a pretty good description of what Proteus has to offer. Some will love it, some will be bored by it, and some will argue it doesn't qualify as a game at all. That's a matter of definition. But while Proteus is probably not going to challenge the conception some have of artistic games as low-rez inaction-fests, that niche of gamers who'd be interested in a chill 45-minute retro vacation will find it a place worth hearing, and a song worth exploring.

Wow, to anyone with a smidgen of imagination, this is like a whimsical dream!
Read if you care at all about my first time in the game.

Entered the game, treading water in an ocean. Look up to see the sun, look around and see faint trees on the horizon. Swim to shore, there are trees dropping their blossoms. Look to over and see yellow on the top of the hill. 'Oooh a flower!' run over to see it, and suddenly a field of flowers! I move on away from shore, see movement, it's a flock of chickens! I move toward them thinking 'I wonder if they'll fly?' They don't, but they startle and run, making a sound like a child playing on a xylophone. I can't help but chase them a couple times, laughing at the sound. Then I see another flock, and I chase them, they run in a different key and pitch. I chase them up a tall hill, and suddenly I can see what seems like half the island of trees. I see a path below, and decide to follow it. Run across what see to be rabbits, and they hop up a hill in front of me. On this hill, I look down and see it's raining in the valley below. I go down and look up to see storm clouds going by overhead. I go out to ocean again and listen to the rain on the water. Then I look and see lights near the ground. 'Oh, are there buildings here?' I go toward them, but then there are lights above! 'OH! They're stars!' I look up and see the moon seeming to be on a path of stars. Then I go up on a hill to watch, then see smaller moving lights near the ground in the distance. 'Fireflies!' I think. But then, a huge streak past me, then another, then many. a meteor shower?! I move toward the fireflies as the stars fall, and I begin to hear music. I begin to see stones and bob up and down to the tune, and the fireflies whirl in a huge circle. I run into their midst, and suddenly time begins to whirl past, the clouds flying and stars swirling, day to night and back again in seconds. I was now caught in a circle of light, and at first tried to escape, but then willingly held still and let the world bleed to white. I left me on a hillside in daylight, just in time to climb to a peak and watch the sun set. As dusk fell, a sound close to me. I turn to see an owl looking right at me! I see a white sparking near the ground, and go to it. It's a white fairy? making music. At my approach, it runs, trailing it's music behind it. I follow it, and stay back to listen to it's music till the sun rises.

Delightful, and I doubt I've seen the half of it!

Wow, this game takes a LOT of power... Win8 running 4GB RAM and 2.4GHz Core2Quad CPU, and it's STILL going slow. I guess I should really update my graphics card at some point (ATI Radeon HD 3600 series). :p

The game is great, but I do wish it came with a little more interaction. I love the exploring and the surprises that you discover (getting to the end finally after 4 plays that got interrupted, I discovered an awesome ending). I do enjoy that the worlds are created each time you play, but if there's no more surprises or actual gameplay, it's hard to stay enthused. Nevertheless it's still worth playing over and over...