Project Borgs is Out of Control

What should have been a get-rick-quick business idea quickly turned into a PR disaster, and, you know, a large death count of employees. Who knew making service robots with built in weapons would have gone so wrong? Luckily, most are still stuck in the factory. So what can stop malfunctioning killer robots? Why, a killer robot that is functioning perfectly. Project Borgs is Out of Control has you at the gears of a defense drone taking on an army of nearly endless robots. Save panicking scientist, collect gears for better upgrades and unlock new stages so you can achieve all 2000+ missions. This arena shooter comes from Ish-games, whose two other games have been, well... awesome, and Project Borgs is Out of Control is of no exception. With the crazy amount of achievements and a "Regenerator" button that restarts everything but increases the amount of experience and scrap you earned, plus more, this is easily a game you'll be thrilled to come back to play after day. 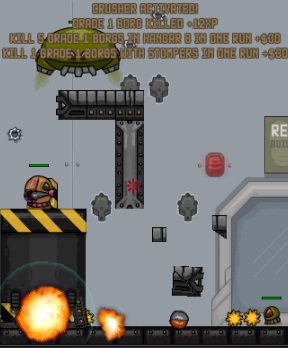 The missions you complete lower the price of the Regeneration, and the more you Regenerate, the easier it is to achieve more missions. Many of the missions you are working to achieve deal with your location of hanger, the type of weapon you use, and even what grade of Brog you are supposed to kill. There are so many achievements, however, that the four shown on your screen are constantly switching between what is closest to being done and what one you're gaining the most ground on. It's hard to pick one type of mission and clear it before the rest as they fly by so fast and aren't organized in any way. Generally, your time playing is a mix of you aiming with the mouse, shooting with the left mouse button, and moving with either the [WASD] or [arrow] keys, and keeping an eye on the rapidly changing missions to see what you should focus on in the next few seconds. The longer you survive in the level, the tougher the Borgs that drop in are. It sounds as if it would get a bit tedious after a while, but with the multitude of different hangers, each with their own twist, you'll find yourself enjoying the grind for hours on end.

Play Project Borgs is Out of Control