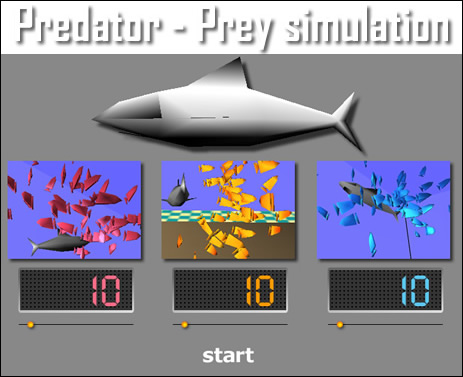 For our final project for MUMS (Multi-User Media Spaces), Jonathan Atleson and I wanted to create a predator-prey simulation in Director 3D. Our objective was to show how naturalistic behavior can emerge from simple intelligent agents. A pre-existing set of schooling fish are introduced to a shark who initially possessed a subset of fish behaviors. The fish are programmed to detect a nearby shark and to flee independently for a while before regrouping. The shark is programmed to lock on to a fish at a specific interval and attempt to capture it. By modelling natural behaviors on a one-by-one basis, we were able to successfully simulate some typical behavior of a real shark in a tank with schooling fish.