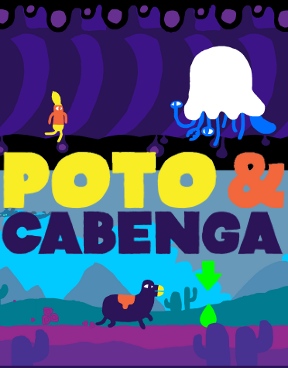 Hey, you! Do you have a [space] bar and reflexes at least marginally better than a slug stuck in a puddle of honey? Then saddle up and play Poto & Cabenga, a surreal, side-scrolling one-button adventure. When one little rider is seperated from his noble steed after being swallowed by a flying serpent... sky... dragon... thingy, you have to control both characters to eventually reunite them. Press and hold the [space] bar to make the horse at the bottom of the screen run faster, and release it to make him jump. At the same time, hitting the [space] bar makes the rider at the top of the screen jump, and releasing it makes him run faster. Sound confusing? Half the challenge in this short game comes from getting your eyes and your fingers to cooperate. The other half comes from being quick enough to make both characters avoid incoming enemies and gather golden feathers for points. Beware; both characters can withstand nine hits, but they both have to make it to the end of the game for you to win.

Poto & Cabenga sort of feels like what would happen if Eric Carle decided to start making flash games. Or maybe if someone decided to make one based on the crazy stories my equally crazy great great aunts used to tell around the bonfire at family reunions. It has a minimalist, dreamlike aesthetic that, combined with it's transporting soundtrack, makes it very satisfying to play. This is one of those games where you really need to develop a rhythm if you have any hope whatsoever of succeeding, but once you fall into that groove, it feels natural. The first time I played, I failed and wanted to set someone's keyboard on fire. (Well, not mine. I need mine.) The second time I managed to get the hang of it and actually finished the game... albeit not with any score worth speaking of.

The whole thing is only about five minutes long, with replay value limited to trying for a higher score. I don't know that there's enough meat behind the concept for me to call for an expansion on it; after all, how many times can you get swallowed by giant animals before it becomes ridiculous? But as it stands, Poto & Cabenga, made for the Gamma IV One-Button Game Competition, is short, sweet, and just challenging enough that I hope we see more from the curiously named team Honeyslug in the future. It also earned its rating for an ending sequence that is, um. Something. But let me ask you this; you are running along the intestinal tract of a giant sky dragon; how do you expect to get out? Captain Planet ain't waiting for you, that's for darn sure. Ick.

I love the idea, but I'm just not the kind of person that's good at these games. 5 'shrooms anyway because whoever made it did a very very good job!

I just couldn't get the hang of the crazy play mechanics. I love the graphics though.

Add me to the list of really terrible players. I think I lost half of my lives within twenty seconds of the enemies appearing.

I struggle to play Ferry Halim's "A Dog for All Seasons"... so, um, yeah. Crash and burn. I like the graphics though!

Poor Yoric got separated from his horse. Banished unto another dimension. But luckily, whatever happens in that realm, occurs in this one also.

It's either that or theyre psychic.

This took me several tries to feel like I was competent with the controls. But once I got the feel for it, it's really quite fun! And the process of 'getting the feel for' the controls is pretty entertaining by itself. So I'd call this a modest success!

Wow, this is really cool. And hard.

Very imaginative. I did well, too! Not perfect, but I beat it one try with several lives to spare xD