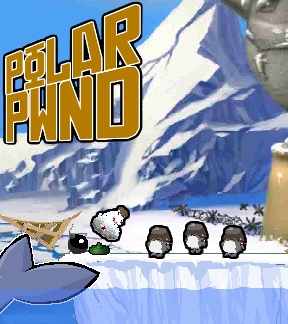 The penguins have declared war on the polar bears, leaving it up to you, a loyal Ursus Maritimus soldier in a sled, to topple the enemy and stop their master plan! Physics, building game Polar PWND is all about placing objects to guide the bear down the slopes, across treacherous waters, and to the penguin-populated goal.

Presented in a cartoony world where penguins wear helmets and walruses chug away at bottles of vodka, you have to guide a sliding bear towards the a bunch of enemy penguins loitering at the other side of the screen. To achieve this feat you are equipped with ramps, bombs and mines. Ramps, as you would think, send the polar bear soldier off an angle. A well-placed bomb can propel said soldier at higher speeds, while mines blow the bear high into the air. Bombs and mines do not detonate until the bear touches them, so the trick is to arrange all these elements correctly to create a perfect penguin-colliding chain reaction.

Adding a bit of spice is the ability to rotate the ramps, plus Polar PWND doesn't really stick a limit on how many of what you can place, bucking the trend of most similar games that use such limitations to increase the difficulty. This means, technically, that you could simply force your way through some levels by just scattering a lot of mines and hoping for the best, but that does take the elegance out of your victory. Instead, some trial and error lets you tweak out the perfect sequence of ramps and explosions to get to the goal.

Analysis: First remark — this is a pretty short game and should not take you more than an hour or so to get through. It has ten levels, excluding the four tutorial stages, and none are particularly difficult. A bit of lateral thought quickly makes a solution obvious, though I have to admit one or two levels were completed with a bit of luck. Like all physics games there is a level of randomness on how the sliding bear reacts to a slide and explosion, though far, far less than anything I have played before. In fact, deviating from its usual response to a setup was the exception to the rule, thanks to a pretty solid physics engine.

This, combined with the easy means to change setups — you restart a puzzle without resetting your arrangement, allowing you to make slight tweaks — means the trial-and-error process is very painless. There are some tricky levels, one involving a sinking ark and another required a precise downward slide for success, but nothing that slams the brakes on you. So overall it's quite painless and though the levels show a lot of potential, Polar PWND never ups the ante. Don't misunderstand: it's a lot of fun to play, but there is much more potential here (no doubt something we will see in the sequel hinted at the end).

Where it does score highly is in the presentation. The artwork is great, though for some reason it forces low quality graphics, which is kinda obvious and sadly cannot be changed — an attempt at McGuyvering some performance improvement? The character design stands out most, though more useless comments from the swaying bottle-brandishing Walrus would have been nice.

Polar PWND comes off like a really good prequel to something bigger, instead of an entire game. In fact, I suspect it is a flashy tech demo for Orbit's physics script, in which case it does a really good job and a fun way to kill a little bit of time without completely knotting your synapses.

Since when did penguins meet polar bears?

@nate8nate I had the same problem when playing, but a fun game any ways

Jayisgames I know this comment is probably not going to be on topic. However as soon as I saw it was from newgrounds, the fact reminded me. Every single game on newgrounds should be at least rating-o with your current ratings system. When I found a game (I am not going to name it) and found it was only rating-y, I thought it would be pretty much okay for my little brother to play it. However I still decided to check it. When I opened the link, I was horrified to see the language on the page. Most people have ad-blockers and therefore you can understand my feelings. I sincerely hope this problem will be justified.

On the topic of this game: I liked how they made a game even while it was loading, I love such games.

I had the same problem with my quality randomly lowering.

Good time waster. Never been a giant fans of these games because most levels have an "easy" way out.

Example would be the last level"

The one with the penguin on the tank moving towards you and a penguin behind the tank.

Simply stack 3 of the mines on top of each other and the tank will have trouble rolling over the mines, thus rocking back and forth, and eventually the penguin ends up rolling off the tank and into the other penguin.

Hmmm... Communist polar bears and Nazi penguins? I LIKE!

Can somebody please read my rant? :P

(In the meantime, please explain to me how to beat the level with the resturant since my computer has a glitch which prevents videos from loading :P)

Nevermind, now I'm stuck on the next level O_o

I loled @ McWhale. How cleverly awesome!! That in itself made the game.

fairly easy game, very short. I await the so called more levels. I did like how every surface had 0% friction, maybe the next installment could include different surface types to offer unique challenges. This installment however was fun but was quite repetitive: slide, explode, jump, etc.