For many people, a perfect RPG has retro graphics, tile-based movement, and a high difficulty curve. Those people are probably already clicking through to get Pocket Heroes, a co-operative role-playing game from F5 Games that can't quite decide if it wants to be a roguelike or a tactics RPG. 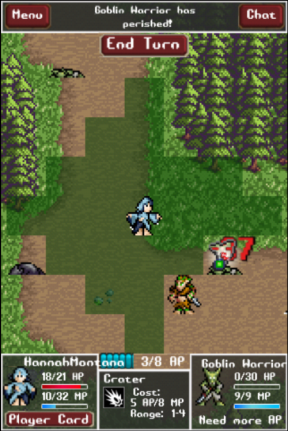 Pocket Heroes is multiplayer only, so before anything else can happen, you'll need to form a posse. Your party can consist of up to four people, and since you can't play solo, you'll either need friends with the game or be willing to risk stepping into a group of random players. There are four characters to pick from, broadly covering the usual range of classes found in games of this ilk: a tank (mech), magic wielder, rogue, and all-rounder (the paladin). Ensuring everyone starts on the right track, the first quest doubles as a short tutorial, although veteran roguelike players will find themselves way ahead of the pop-up tips.

Each turn your character has a range of actions available, from movement to attacks to magical powers. More skills are unlocked as you level up. All actions other than movement cost AP, and magic costs both AP and MP, limiting your most powerful spells to when they're sorely needed. The goal on any level is to get from point A to point B, where there's a shop and a place to rest, taking out any enemies you encounter along the way.

Once you've played your turn, you're at the mercy of your team. It's essential to work together, and one person charging ahead or ignoring team strategy will cause problems. Similarly, a greedy teammate who hoovers up all the loot will leave everyone else underpowered. Experience is shared, so the healer won't get left behind, but beyond that the game doesn't offer any incentive to work together other than the knowledge that if you don't, your group will find the going difficult.

Analysis: Pocket Heroes ends up as more of a tactics RPG than a roguelike, but there's enough of each for fans of either genre to enjoy. The going is slow, tactics RPGs aren't known for being quick to play in the first place, and each turn is less of a full bite and more of a crumb. Even with dedicated teammates, speed rounds aren't possible, the game just doesn't play or sync at that sort of pace. And if your team does get wiped out, it's back to content you've already completed, since levels are static instead of randomly generated. 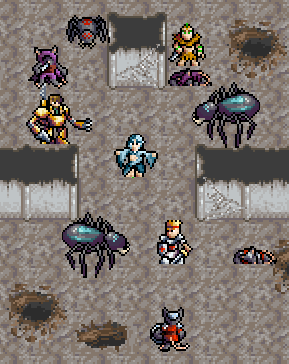 Teamwork is key even outside of battle, and one person not holding up their end of the bargain can cause major problems. Respawns cost gold, which is in limited supply unless you get more through in-app purchases, so anyone struggling with basic strategy will quickly find themselves out of the game. The problem is that dead players still have to take their turn each round, even if they're unable to do anything, and until they do, play is held up for everyone. A frustrated player who gets killed early on in a level and has no investment in the group effort is likely to stop the game progressing at all simply by not caring enough to keep passing their turn. Worse is the fact you may have spent real money to buy additional respawns or equipment, which are on a per game basis and could therefore be rendered useless by one uncooperative player.

On the other hand, co-op role playing games of this type are rare, and once you get into the thick of battle, Pocket Heroes is every bit as enjoyable as any other tactics RPG. The short turn length and drawn-out games are advantageous to those who don't have the time to invest in a full length RPG or who just want something to check in with in the same manner they might check their e-mails during a day.

If you have reams of patience, prefer your RPGs to be co-operative, and have at least one other friend that feels the same way, Pocket Heroes has enough content to keep you entertained for a while. As a gradual, group effort, this is a fine role playing game and planning strategies or sharing loot is as enjoyable as ever. Just don't expect to beat it over the course of your lunch break.