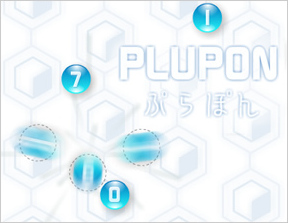 We here at Casual Gameplay have been fans of the work Yoshio Ishii has been doing in Shockwave and Flash for several years now. He may be best known for his Neko series of games (neko means "cat" in Japanese), though he has also created some of the best Panzo games as well. His latest effort is this beautiful and delightful game that will give your brain some stimulation as you play.

The objective of Plupon is to click on 3 falling numbers to combine them, but to progress in the game you will need to create sums of 0, 10, and 20. Sums lower than 10 simply combine to form a new droplet containing the sum; but sums higher than 10 are marked "over" and reduce the 'health' bar at the bottom. Letting the droplets escape beyond the bottom dotted line also reduces health. If the heath bar depletes entirely, it's game over.

Try to achieve the highest score you can. A nice point bonus is awarded for combining 3 zeros.

It's a very simple (and short) game that is just right for an afternoon delight. Once you have completed all 7 levels, the game is finished.

Cheers to Kero for the link. =)

If only I was better at elementary math ;).
Overall this is a slick, fun game! Wahoo!

I like the concept of this game, but I think I might be deaf now after playing it with my headphones on.

Here's a tip for higher scores:

Don't wait to find something worth 10 or 20, combine for sums less than 10 to give you more numbers to play with, and to prevent numbers from falling off the bottom.

Jay, how can I know that you aren't leading me into a devilish pile-up of 9s?

Here's my tip!
It seems better to combine and go over than to loose the numbers completely ;o

Add it up and Plupon that a while. ;p

grr... I kept selecting the circles only to have them unselect themselves before i could select 2 more. happened like 3/4 of the time!

and that "ding" thing is the most annoying part of the game.

other than that, it's an awesome concept that, as fuzzboxer said, needs volume control or just needs to be quieter.

144,940 :) Saving up and trying to get those triple zeros in the beginning levels gets huge points. Got that on my 2nd run through!

It's a fun game, but the name gets me. I can't help but think "Pardon me, would you have any Grey Plupon?"

good game. tip for everyone out there who wants to disable the sound on those games which don't give you the option. download flashmute. it gives you the option of completely muting the browser as well as adjusting the volume. great little program that i always have running in the background.

This is my favoritest game in a long time. i heart maths.

The 4,000 points for making a 20 is a 2x 'bonus' rather than a 4x, as 4 'completion circles' are filled. It can be a nice bonus if you make a 20 when only one circle remains, though.
The best way to get points is to concentrate on getting 3 zeros. I find that in level 1, the best tactic is to 'stall' the downpour as much as possible, and give yourself as much chance to let the 0s accumulate onscreen. You can highlight two circles, then stop a 3rd by touching it, meaning you can keep 3 circles static. Try to collect 21 or 11s when possible in level 1, so you only lose 1 point of life, giving you as much time as possible to wait for the 0s to arrive.
As you can only get a max. of 8000 points from health but gain 10000 points from every 3 0s you combine, it's always worth it to lose health in order to stall if you get at least one set of 0s as a result.
Yes, combining them and losing health that way will always lose less health than letting them fall off. Letting them fall off loses n points of health for each number, whilst combining 10+n or 20+n loses n points of health - so you're saving yourself 10 points by combining.
In later levels, I found it best to simply collect them quickly, trying to make them quickly enough so I could have 3 0s onscreen thanks to my fast removal.

After the game ends, you can drag a box out from the corner (it says 'drag').
If you pull it out, it says:

You completed all the levels! Great!
Thanks for playing.
I don't really know what the rest means...

The deselection is what's frustrating me on this one. It really seems like there's about a half second for you to gather up Plupons; either that or my reflexes suck (which could be, the bubbles don't stand out much against that background).

Ah, well it looks like I've sort of got the hang of this.

If you're imprecise and click on the background, all circles are deselected. If you click a 2nd time on any circle, that circle only is deselected.

This can help an awful lot

Here are some strategies that I found useful for maximizing score. (some of this may repeat/reinforce what Bezman said)

You want to have as much choice as possible for your move. So any time you are not combining numbers, you should have two numbers stopped by selecting them and one stopped by your hand. You may also want to move your hand around to block multiple numbers. As long as no number falls below the line, you are fine.
Combining 3 zeros is the best way to maximize your score. Getting a sum of 20 is your second best option.
Also, if you have 2 quotas left, it is best to get a 10 and then a 20 (so that you are over by 1).

This is the slowest and easiest level. This level drops 0s so depending on your luck, it is very easy to get (many) 3 zeros. Unfortunately, your quota is only 3.
Combine many of the small numbers into a large, but On average this level should yield 30000 points.
An alternate strategy would involve making many 21s (and hope to get many randomly generated 0s by surviving long enough). I have not tried this yet.

This is the best level to increase your score. The numbers drop slowly and your quota is high. Use the same strategy as for the first level and make lots of 10s or wait for 0s to drop.

Only numbers between 1 and 3 drop in this level. Combine a few of them early. Then when there is enough on-screen, make 3 zeros. Don't wait in hopes that a 0 will drop.

Somewhat like level 2 except much faster. It may be a better idea to make a few 20s here if its too hard to get 3 zeros on-screen.

Thanks to Bezman's strategy, I now have 218650 as a high score. One suggested change would be:

Not to stall on level 3 as it doesn't drop 0s. One could theoretically get 2 triple 0s here but I would just go for 1 and then doubles.
On the levels after 3 (especially 5), I found it to be too hard to keep the 0s on screen because the game was becoming too fast.

Fun game. You actually have to think. Took me a while, but managed to complete it. It was more luck than skill, but still, 107,040. Yay! Love the sound, by the way, rather soothing.

Great, but why no pause button?

Um.. guys... Hey, you guys? Does anybody know why everytime I click on one of the three links provided on this page to play, it tells me FORBIDDEN, that I don't have permission to access it on this server? The game worked fine for me just a couple days ago... =( I want to Plupon this!

I got the most points in level 1 actually, since even though the quota is only 3 it's so slow that you can combine 11's until zeros drop for you. I just held off until my health was low then finished it with a 20. I had over 80K at that point.
Level 2 was OK; I used a few dropped zeros but had to make four 10's comparatively quickly. I had 140K at that point!!
Level 3, I managed to make three 10's in time to combine the three zeros, then finished with two 10's and a 20 and passed with full health.
Level 4, I combined a 20 and two 10's in time to combine three zeros. The high numbers made the initial 20 necessary.
Level 5, I just got a 20 and passed with full health.
Level 6, I used a zero in making a 10, then got two 20's to win the game!

This is the website for more levels, more codes, more backgrounds, and more tricks. Copy and print this web address for the full version!!!