Plasma Worm is a free (until Sept. 15th) downloadable arcade action game for Windows, and it is an evolution of the traditional snake-eats-the-pellet games that have existed since time began. Created by indie developer, Digital Eel, the game pays homage to Douglas Adams, and the storyline (such as it is) involves the piloting of a plasma worm through a tank within the Improbability Drive, eating stray probabilities that could gum up the engine.

There are several features that make this game an engrossing and enjoyable diversion. First, the game is comprised of 20 levels of increasing difficulty, rather than being a single-level, live as long as you can, exercise in inevitability. Collecting 10 probabilities (at which point the worm is pretty darn long) advances you to the next level. Passwords allow you to jump to particular levels, so you can start up again where you left the game or replay levels later. The separate levels make the game obsessively playable, and the early ones also help to teach the player about the various enhancements to the game.

Those enhancements are quite cool. The plasma worm, really just an outline in a sea of hallucinogenic goo, gives a strong impression of swimming through the game field. You can move the worm left or right with the arrow keys, and in certain situations fire little plasma bullets with the space bar. The controls are very fluid and responsive, with a full range of movement and decent reaction to nudges. Although you can't turn on a dime, the worm is capable of navigating pretty tight spaces and making sharp turns. This is obviously enormously helpful in a game where the whole point is not to bump into anything. 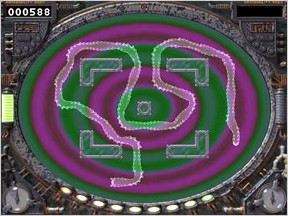 The universe in which the worm operates is still two-dimensional, but it has become much more interesting. Certain tiles on the game field can cause the worm to slow down or speed up, and walls serve as obstacles to your ever-growing worm. As mentioned, a gun power-up allows the worm to fire bullets for fifteen seconds. There are reasons why bullets are useful, but I don't want to spoil the later levels for players.

All in all, the game is well constructed, with a lot of attention paid to ambience. The background effects and the frame in which the game is played really give one the impression of looking into a tank of some sort of glowing goo. The soundtrack and sound effects are understated but interesting, with separate volume controls for each in case one gets on your nerves.

If the music (or the pulsing background) is giving you fits, however, you're also welcome to change them yourself. Plasma Worm features a level editor, which in turn features a plasma editor (tweaking the color cycle, contrast, and other elements of the plasma background) and a music editor (basically a sequencer that allows you to compose your own background tracks out of preset samples). All of this just adds tinker value to an already very fun game. The music editor in particular is great fun to fiddle with, although it's worth a trip to the instructions to figure out how to optimize your DJ experience. The level editor is intuitive, but keep in mind that the game opens the editor with level one pre-loaded, so any changes you make (unless you save them under a different name) will appear on level one the next time you play it.

As if that weren't enough, the game also offers two player cooperative and versus modes. Quite a package and definitely worth the download. Also, did I mention, free?

It is available through Manifesto Games, a new retail store/blogspot for computer gamers. They sell indie games, as well as providing reviews and links to bigger productions (Puzzle Pirates, for instance, appears in their directory of games, with a referral link to a download page at puzzlepirates.com). Most of these appear to be PC only, although a drop-down menu allows users to filter games by OS. Manifesto is not shy in regards to its opinion of the big game producers, and seems like a great way to support the little guys of gaming.

Registration at Manifesto is free, entitles you to a blog of your own, and also (until Sept. 15th) provides you with a free download of Digital Eel's Plasma Worm, which is worth the trouble even if you don't become enmeshed in the blogosphere that is Manifesto Games, or ever buy a game from the store.

No Windows version either? At Manifestogames it is just said: "No demos available at this time."

Amor Lassie - from the last paragraph of the review...

"Registration at Manifesto is free, entitles you to a blog of your own, and also (until Sept. 15th) provides you with a free download of Digital Eel's Plasma Worm"

That last paragraph was actually J-P's second paragraph, but I switched around the order of the review before publishing.

That's a pretty fun game! I got to lvl 7 and accidentally quit, so I thought I'd post here before going back into the program.

My only suggestion for new players is to change the speed to either normal or hard. That is...if they want to keep their sanity :P

It was very low res, but absolutely RAWKED!

Mordecai: Yes, I forgot to note that "Easy" is really, really easy. That might be my only quibble.

Allegra: Alas, no Mac version. I have a dual-boot on my MacBook for no reason except games. :(

One quick housekeeping note - I need to update my typekey email, in the meantime anyone wishing to comment directly should write me at jvoilleque at gmail dot com.

Well for the hassle of subscribing by email, and having to download an install a game on my computer, I honestly see a me-too snake implementaion only midely worth it.

About the no mac version; whilst we live in vague hope of cross browser support [what, No worky for firefox?], and soforth, I think complaining about a lack of gaming support for macs is a little strange. if you want Games for a Mac; Go Dualboot. you can be anti-windows all you like, but if you want to play games, Get a console/PC.

I'd love for people to make games for macs, but when you can dualboot, why should they? do Unix and sunserver admins cry that they cant run Warcraft on their boxes? No. Do console users whine that they cant write emails on a Playstation? No. A Mac is a Mac. a Games Console is a Games console. a PC is a PC. expecting them to be all the same is a bit like complaining you wanted a peanut butter sammich when you bought grape jelly.

The more noise us Macintosh users make, the more likely game producers will see us and make us more games! I would like to see this game on the Mac, it looks very interesting, but dual booting isn't something I'd like to do: I don't want to spend the money, use my HD space or get viruses. The way Apple's market share is growing and the way Vista looks right now may mean we see a LOT of new software in the comming years. In the meantime, I can wait and play WoW.