Darwin must have been a heavy sleeper on Galapagos Island when he discovered evolution. How else could he have missed the alien abductions happening all around him? Confused? Well don't be. Clearly evolution was caused by an Alien race wanting to help humanity along, but they had to be quiet about it, so they just cleverly altered the animals on earth to help the people grow in the right direction. Isn't that what's being taught in classrooms today? PlanEvo, by High Tree Games, is a simulation strategy game where you fiddle with the stats of animals, such as size and fertility, to complete quests your co-workers bring to you. All with the same goal in mind... to help those sad little humans get their species off on the right foot. But everyone knows about the butterfly effect. What do you think is going to happen to the zebra population when you make tigers have better camouflage? So get to fiddling on the sidelines and see how fast you can help humanity come to the state where they can debate about your existence. 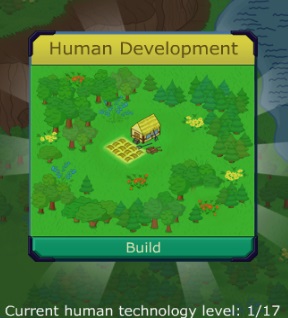 There are quite a few statistics to play around with for each animal you have, though in the beginning you have to slowly unlock them. Some will change their interaction with other animals, and others will just affect the how-and-where of the population growth. But nothing clearly says what the effects really will be, so you kind of have to figure it out yourself and keep and eye on all the charts and infographics given to you to see how things are affecting other things. But you can't just alter animals willy nilly. Each state requires their own points, which are slowly gained over time. You can increase the rate of gathering by accomplishing achievements. With the achievements, quests, and the multiple animals it can kind of be hard to keep track of everything. What this game is really missing in an overview of all animal together instead of just seeing them individually. But even if you're not one for strategies or fretting over if increasing or decreasing the size of mice will help the population, it's still an incremental game to be enjoyed through plain old guessing. The storyline is quite light and fun and you can win it within a few hours if you control everything well enough. So get your tractor beam ready and started altering the genetics of earth creatures. It's for the good of humanity after all.