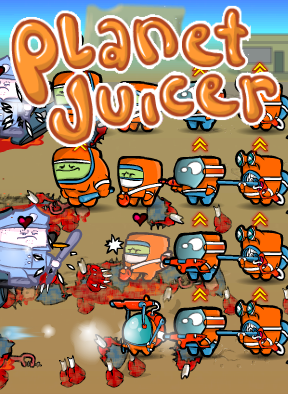 Space mining comes with certain dangers. Top of the list is the constant threat of attack from natives, who just don't seem to appreciate your need for the minerals on their planet. There's a constant need to defend mining operations that many people never see, and in Planet Juicer, a side-view tower defense game from Yellow Bouncy Ball, you're in charge of keeping the mine safe.

You don't get to do the mining yourself, though. With gameplay following the lead set by the popular Plants vs Zombies, it's up to you to defend lanes of attack against various monsters, across three different planets. The game is entirely mouse controlled, using clicks on the field to place or upgrade towers, and the icon at the bottom of the screen to open the lab. In the lab you can research upgrades, which persist across worlds once unlocked. At the end of each world a boss shows up to test your build, so it's a good idea to get research done early and the more powerful towers ready before the final wave.

Planet Juicer is shorter and easier than other games in the genre, and the strategy is less involved as a result. But visually the game stands out with cartoony graphics and colorful animations, and there's little downtime during waves, meaning it never feels too easy. Pacey and well presented, Planet Juicer is a colorful bite-sized treat for defense fans, with the boss battles a particular highlight. You get to fight Master Splinter. Need I say more?

Earth is too hard...
Also, it is insane that the record will be erased after several lose in the game...

I think it would benefit from some intermediate levels for sure! But very cute. I can't figure out why the rats aren't worth as much. It was nearly impossible to create anything new in the lab. Did I miss something that increased kill values? I haven't made it to Earth yet, so maybe that's part of the "difficulty" scaling--the creeps are worth less with each level?

@bearharry: Yes Earth is hard, but there is a way to make it easier by
spending you upgrades wisely by choosing what you use/think is best for you.

The real help is going back to planets you have already juiced. Yes, you can redo levels even though it is not recommended. If you can't click on it at first click to the current planet/level, then click don't play to get back to the level map. You should be able to choose any planet now. Pick the first map and once you get strong setup, hoard all the cash to have an easy start on Earth.
Also each time you juice a planet (even ones you have beat), I think your rank goes up. Good luck.

I had fun playing the game and crushing all my foes, but

I felt the final boss was disrespectful and in bad taste. It ruined my experience of the game immediately. The achievement you get for beating the game makes sure you know it's not just your imagination. Secondly, we're invading earth, not just the USA! What's up with that?

As far as strategy...

Lastly, regarding the yellow :O rating...

Fighting earth has quite a lot of blood and guts, so I would say the rating should be orange or above. At least they don't depict killing the final boss! (although they say you did in the achievements)

I dunno, I'm not into politics or anything, I just think it's disrespectful, is all.

Good game but I frequently find myself not having enough money. I just discovered a way to earn lots of money in the first level:

after you've killed off all the tentacles except the one that summons minions, immediately sell all gunners in the middle row and replace with 1-2 flamethrowers/bruisers. The alien will keep summoning minions without getting killed. At this point you can go afk and come back very rich.