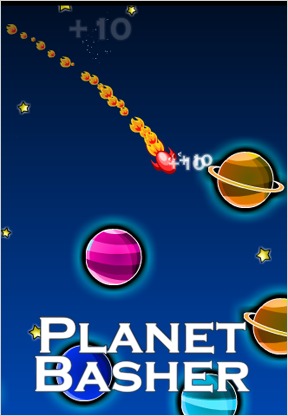 Upon first look, Bad Viking's (Popopop) new title Planet Basher looks like some simplistic ballistics-y physics-y star collecting toy. Take your slowly rotating cannon at the top of the screen, line it up with some stars, and fire. The rocket you launch collects any stars that it touches before it drops off the bottom of the screen. Woohoo. But that was before I bought my first planet.

Once you fire all your shots and collect as many stars as you can, you go to an upgrade shop where you can, among other things, buy planets. So I bought one, placed it on the screen, and went to the next level. I fired my first rocket directly at the planet, and it bounced off! It was then that I realized the true fun of this game. It's about building bounce trails with enough planets to keep your rocket in the air long enough to collect the 200-stars-in-one-level necessary to win the game.

When it comes to spending star dust, there are a number of other opportunities, such as upgrading your rocket's star magnet and the fuel for said magnet. This gadget pulls in stars from all around you in a mass of magnetic attraction, for as long as the fuel holds out. The star shower allows you to make the stars fall faster and more frequently for a limited time. You can also increase the size of any planet on the playing field. All of these objects and upgrades are crucial to completing the mission.

Analysis: Planet Basher is a strong game, the kind that comes out of nowhere and kicks you in the butt. Fortunately, it sticks around to give you a pleasing gaming experience. Planet Basher's game style isn't easy to categorize, but the closest I can come are the pachinko simulators in Japan or PopCap's recent hit Peggle. [Ed. - You might also try John Cooney's Hedgehog Launch for a game with a similar structure.] Bouncy-bounce off of the planets that you've set up, collect as many stars as possible, and upgrade yourself into a position to collect all 200.

Game execution is pretty much flawless. I didn't come across any weird glitches or pockets of questionable game-physics while playing. The ability to shuffle around planets in between rounds is very nice, giving you a chance to close up holes in your rocket shots. Graphics are appropriately bright and bouncy. The music is nice, especially the rock riff used for the main game. Extremely cool, Bad Viking. Keep up the good work!

I've been able to complete the game in 18 rounds. Apparently, good players are completing it in around 10 rounds, while some have even managed it in 5. I guess with a couple of well placed planets, some excellent shots, and a cool hand on the star magnet, it could be possible. Either way, Planet Basher is a blast to play.

Ive been able to complete the game in 7 rounds...

Fun, simple, short. I did it in 6 rounds on my first play.

Completed it in 6 rounds on my first try.

I would have liked to see an option to fast-forward the falling stars in-between shots, though. I found myself waiting until the field filled up again after each shot to increase probability of collecting more.

For me the trick was the a highly fueled star magnet.

This game is relatively fun, but far too simple.

Spend all your money buying 3 planets at the bottom, enlarge them as fast as possible until they are as big as possible. With only a couple small holes for the rocket to fall through, the rocket just racks up points.

Spending money on anything else afterwards is just icing on the cake. This makes the game beatable in 4 or 5 rounds quite easily.

I clicked play as soon as I saw "physics"

I had a good time, but was a little disappointed when I won on round 4 on my first try without finding out what star shower was.

I only had an un-upgraded star magnet, and had a couple of horrible shots (that went straight through my gaps). I suppose I just got lucky on my other shots :)

After playing again, if the developer were to change anything, I would suggest making the rocket have a set amount of fuel, that way the rocket can't bounce around forever. It would also make people decide between more planets and more fuel. I also like the idea of fast forwarding :)

I ran into one glitch... but wasn't able to duplicate it. All in all, was a fun game.

Had a simplistic layout, with 2 planets at the bottem. The rocket rebounded through my maze, hit my bottom most planet, 'ricocheted' around the planet, and fired straight back up again.

I was 'what in the' but then I didn't feel like complaining because it was a cool glitch.

second post. Just completed it in 5. almost had it in 4, but I ended 10 stars short. IRRITATING

My rocket once did a similar thing (or maybe the same thing) where it looked like it was riding along the planets surface.

I did it in 8 on the first try, but on the second my rocket got stuck in an infinite loop bouncing between the wall and two planets. Great for racking up stardust. Not so great for actually playing the game. ;)

It looks like the leader board is full of people who one in level. Is that even possible?

It is possible to get infinite rocket loops..

My new record (after two more tries): Round 2.

Just made two size 3 planets at the very bottom middle of the screen.

Ha, oh you guys. Yeah, I beat it in 10 my first try. It was enjoyable but not something I'd like to play more than once, to be honest.

Finished in 7 rounds at my first try. Easy game. All you need is a little luck.

Decent one-shot casual game, but no replay value in my opinion. Hedgehog Launch is quirky enough to bring me back for more.

9 rounds. Not too shabby. Would be nice if it was a bit longer, but fun all the same.

I think the one flaw in this game is that it doesn't let you keep playing after you reach 200, like Hedgehog Launch, but it's far more difficult to keep playing this after getting the ability to reach the goal point. And once I was finally done with the game (18 tries

Something must have been different about my game than everyone else's. I got it in 2 rounds on the first try, and I never saw a single planet. The first round, I got 119 stars. I could probably get 200 on the first round, now that I know what I'm doing.

That is, if I wanted to play the game again.

Haha! My spaceship is stuck on a planet on the edge of the screen. I'm up to 250,000+ stardust, but only 190 stars collected now since hardly any stars come to me!

My rocket thing got stuck between 2 plants(near the walls, diagonal from each other)took about hours but got 200 stars and 1000000 stardust, in round 5.