What tiiime is it? Time to help a quartet of astro-explorers escape from the hostile planet they've crash-landed on in DSoul Team's Planet Adventure. Their galactic detour is a little bit platformer-country, and a little bit physics puzzle rock-'n'-roll, as you must avoid obstacles, solve puzzles, and collect lots of shiny gems and keys by swapping between the four heroes and using each of their unique powers. Use the [arrow] or [WASD] keys to move, and the [spacebar] to activate each character's unique ability, be it stone armor, grabbing claws, bombs, or teleportation. Swap between characters by using [tab], or by clicking on their portrait at the bottom of the screen. You can always use [R] to reset the level should you get stuck! 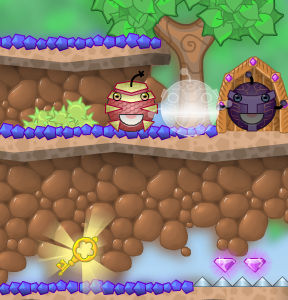 The game is all about creatively utilizing the different powers of the four heroes, both alone and in tandem. Those combinations alone lend the game a great deal of variety, and the types of challenges they face are no less diverse. Fly through the sky deftly avoiding lasers and spikes, teleport through pipe mazes, or even be drop blocks in a Tetris homage. There's even a few mini-games thrown in, which is a pleasant surprise! Sadly, the physics aren't always the friendliest on the block... sometimes they're jittery or slow, and the imprecision can make things like moving objects, or rolling across gaps, frustrating. Due to this, and the precise nature of some of the puzzles, you'll need to reset often, though the levels are short, so there's not much setback when you do. It might also be said that the music is a bit too infectiously happy for its own good, but the wide array of ideas on display makes for a fun and clever diversion. Just be on the lookout for strange hot dogs.

Is this game related at all to Snail Bob?

3,158 Views
2 Comments
chrpa— Jayisgames needs your help to continue providing quality content. Click for details It's nighttime and you find yourself in the garden of a small Rinnogogo's hotel. The garden gate is locked and the garden seems deserted but after a while...  ...

Esports - A Hobby or a Way to A Career?

1,002 Views
0 Comments
jayisgames.com— The popularity of e-sport tournaments is growing rapidly around the world. According to agencies and Newzoo , the viewership of such competitions already exceeds 450 million people, the market is estimated at a billion dollars with an increase of about...  ...

1,779 Views
7 Comments
chrpa— Jayisgames needs your help to continue providing quality content. Click for details Hi! Weekday Escape and Weekday Puzzle are here! The first comes Amajeto (yay!) and then tomoLaSiDo with their escapes, and then stone with a little bit unusual...  ...

4,777 Views
1 Comment
chrpa— Jayisgames needs your help to continue providing quality content. Click for details We already know that Colorbomb (Studio LOOK) from time to time create excellent escape games - the links to all their escapes you find below - but they...  ...