Pixel Rain is a physics-based puzzle game from Silicon Studio. Taking the look and feel of a classic handheld LDC gaming system (come on, you know you've at least seen them on the internet), you are handed several dozen levels and challenged to drop gems and coins onto the playing field so that they're protected from the rain of dangerous pixels above. Sounds easy, but the level design means you'll be doing everything from quick-drop ramp stages to precise placement of blocks on a sparse screen. 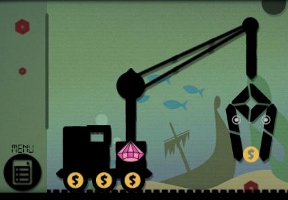 Your inventory of shapes and gems occupies the left side of the screen, with the playing field taking up the rest of the space. Drag items from your inventory and drop them from the upper portion of the gamespace. You'll be given a wide assortment of shapes to use, from Tetris-style blocks to long platforms, small squares, and just about everything in-between. Once the inventory is depleted, the glowing hexagons that were moored at the top of the screen are released. If they come into contact with the coin or gem on the screen, you have to start the level over. If not, you're an awesome person with an awesome brain!

Here's a surprise treat: online level creation and access to user-made levels! Pixel Rain's editor is only available in your web browser, not on your phone, but it allows you to create drafts, test them, then submit them to the game. There's no way to choose specific user levels to play, which is a bit of a letdown, but the stages you're presented with are enormously creative and challenging, and you'll have a great time extending the game's life with these stumpers. 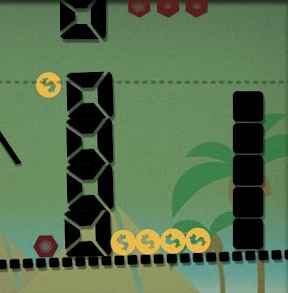 Analysis: Nostalgia, the number one reason why we get all giddy about some games. Monkey Labour went all-out for this several months ago, reproducing not only the look but the gameplay of those classic LCD games. Pixel Rain banks on this with its visual presentation, adopting a style that's clearly aimed at former owners of Game & Watch systems or just about anything from Tiger Electronics. And it really works, too, as the game feels like a touch-manipulatable version of an old LCD game with a puzzle wrapped around it. Neat for so many reasons, but even without the nostalgic element, Pixel Rain is a great puzzler to lose yourself in.

It's a free download, but Pixel Rain is supported by a few in-app purchases that both bestow buckets of coins upon you as well as remove in-game ads (which, to be perfectly honest, do get a bit repetitive). Each time you fail a level, you'll have the option of retrying, or retrying with a few helpers turned on in exchange for some coins. You can try again in slow-motion, for example, or add a few blocks to your inventory to help things along. You earn coins naturally as you successfully complete levels, but if you want a boost, you can pick up a pack of several thousand for a small price. Completely optional, but reasonably priced, if we do say so ourselves.

Simple puzzle premises often lead to stunning puzzle games, and Pixel Rain is a great example of that in action. It delivers a lot of challenge in a small package, and the included level editor goes a long way to adding replayability.

NOTE: This game was played and reviewed on an HTC Incredible. Game was available in the North American market at the time of publication, but may not be available in other territories. Please see individual app market pages for purchasing info.