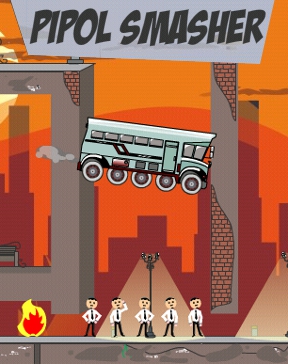 How often do you get to say Stephen King was right? The vehicles have gotten sick of their soft, squishy masters, and I'm going to go right ahead and blame you for this one, pal. Is it because of the time you let those guys who stank of Axe Body Spray drive it to their kegger? Is it revenge for that one thing you did in your parents' car you think nobody knows about? Pipol Smasher by Vogd is a physics puzzler where the goal is to incapacitate all the helpless ragdoll pipol to get to the next level and cause as much damage as you can. Click on a vehicle to start it moving, then click it again to make it stop. Since the pipol are strangely reluctant to be smashed and have tried to place themselves where you can't get to them, you'll have to utilize your environment full of precariously balanced objects and the power of vehicular teamwork to reach them. Just don't get too cocky; send a car flying offscreen and you'll fail the level. If you get stuck, just click "restart".

If you're noticing some similarities between Pipol Smasher and Vehicles, there's a good reason for that... namely, Vogd created them both. As such, Pipol Smasher's first handful of levels feel like a de-cutesified retread of familiar territory. The biggest problem is actually one you'll find in the lion's share of physics puzzles, and that's a frustrating tendency to have to hope for the best as the physics engine takes over certain finicky events. There's also very little instruction given, so for the most part you're left to experiment with your surroundings and find out how creation objects react to a judicious application of homicidal car.

As mildly gruesome as it may be in concept, Pipol Smasher is actually bloodless, and there's something incredibly entertaining about dropping a bus on unwary pipol, or sending a helpless ragdoll flying towards his buddy to knock them both into a gout of flames. When the physics work the way they're supposed to and you nail the timing, certain levels are wickedly fun to watch play out the way they're supposed to. Only a few of the game's thirty levels are actually that tricky, requiring you to be quick with your clicks to win, and I might actually have preferred a bit more of a challenge. All of this combines to make Pipol Smasher a flawed but fun little coffee break of a game to enjoy. Then again, I am admittedly a little twisted. How about you?

Thanks to Roomescaper for sending this one in!

I discovered this just a day or two ago, and I came away convinced that it is by far one of the best games of its genre. It doesn't last for too long, and the optional challenges will require you to redo a few levels. But it's not impossible, and it's STONKIN GREAT FUN.

Okay, how am I supposed to solve Level 10? As far as I can tell, I'm supposed to

drive the lower car up the loop to take out the pipol on the ledge above it, but it can't seem to go fast enough to make the jump.

Nice game, though. I like the Werebox cameo in one of the levels.

That level is a bit (intentionally) misleading. That curved ramp is pretty much a red herring; it's actually the top car that's supposed to take out all those pipol. Just drive it off the screen; there's some stuff off-screen that will turn it around and line it up to finish them off. Fortunately, I think that's the only level that really uses an off-screen trick like that.

Kinda cool but corky at the same time. I've made it to level 7.

I don't like level 28.
you really need a lot of luck there.

and only once was i able to create a mound of bodies that the bottom car was able to climb and hit the two buttons. but then it was stuck on the heads and couldn't reach the last guy at the bottom right.

It is easy - there is a trick

Move the bus bottom left a bit so that the bodies land on top of the bus.

Ok, turns out level 28 has an easier way.
so never mind my last comment.

1. Use the top right truck to push the box off the edge.

2. Start up the bus and get it to fall so that it lands, upside-down, on the ledge below, then stop the engine (though I don't know if stopping it is necessary).

3. Start up the lower truck; it'll push the girder out from under it, dropping the box on the right-most person. The girder will then land on the bus's wheels.

4. Start up the bus, pushing the girder into the space to get the second person.

i finished the game and it was easy

It no longer qualifies as a "physics puzzle" if there is any element of luck. Don't believe me? Play level 7 repeatedly. Sometimes the car will crash and fall. Sometimes (usually, in fact) it won't. Sometimes your score is dead on the maximum. Sometimes it isn't. And ALL of this is when your absolute only input is a single, timing-inconsequential click.

Level 7 starts with the car bouncing on its wheels. If you start it mid bounce you can get it to fail every time. If you wait for it to settle before clicking then it works every time.