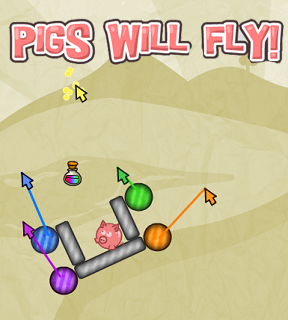 You remember the little piggy who went to the market? Well, that pig had to walk while the piggy in Eliot Pace's anticipated physics puzzle game Pigs Will Fly could... you get the idea. The potion-guzzling pig is back for more time distorting fun as it needs your help to realize its dream of flying once again. It may need a liquid stimulant to get this slothful swine off the ground, but the challenges it faces to get the potion are more formidable than it has faced before.

For those familiar and unfamiliar with this high-flying ham, each level you need to get the pig to somehow reach the rainbow potion and it can get its wings (no, not with Redbull). You are given certain colored potions each level that, when left-clicked on, allow you to manipulate any object of the same color. It records any actions and movements made with that color and lets you enact different opreations with the next color potion you choose. The actions of each color will remain intact and animate as long as you do not select a color you have already used. The timing and synchronization of each color's actions is where the player's difficulties lie and is what really brings home the bacon in solving these puzzles.

Since April when Pigs Can Fly was reviewed here, Pace took what made it such an excellent casual hit and tweaked the problem areas some people might have found bothersome. The user interface loses its messy row of buttons and upgrades to a more pleasing pop-out menu, while the in-game art gets revamped with sharper sprites. The game screen is larger this time around so there is more room for large scale and complex puzzles that require precise commands. Although there are five less levels in this iteration, the improvement in challenge more than makes up for that, and the mobile (iOS) version has ten more levels than its browser counterpart. What isn't there to like about ten extra levels and the FREE price tag? The game claims that pigs WILL fly and it delivers, so get to work! The pig won't move itself you know!

Great game, I managed to miss the first one, so played that through first.

I wonder, does anyone know of games similar to this series, and the two cursor*10 games??? I'd love to play more like it.

@MattOG, I don't have a specific answer, but I find the tags in the games are a good help.

I haven't found vary many of these types of games in my flash game searches so I can't give you a good answer. My bad @MattOG