Since I was fortunate enough to grow up in a small town that was downwind of a rendering plant that perfumed the whole landscape with rancid pork at certain times in the summer, I already associate pigs with the changing of the seasons. Fortunately, Anton Koshechkin's given me a much more positive association with this sequel to his original physics puzzler, Piggy Wiggy Seasons. Which is, incidentally, all about stuffing cartoon pigs with acorns as they rappel themselves around the screen via lines and pulleys while you listen to peppy music that makes you feel like you're sitting at the New Game screen in Earthbound. Win/Win! 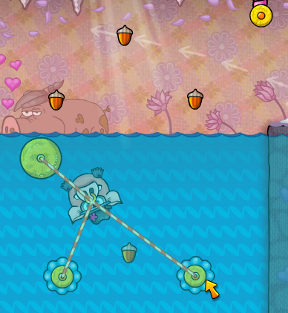 Just click on a pig, drag to any connector nodes in range, and release to have your porker shoot out a rope they'll be suspended from... just don't touch the spikes! You can connect to multiple nodes, and unlike the original, sever any ropes by just clicking and dragging through them. As such, the whole thing is essentially, well, Cut the Rope, but with piggies... and, y'know, that's not necessarily a bad thing. It's cute, it's colourful, and its level design is smart and engaging with some particularly neat and imaginative layouts and mechanizations. Piggy Wiggy Seasons's slicing may remind a lot of its inspiration, but it's a beautifully designed little coffee break of a game that shows just how fun simple casual physics puzzling can be.