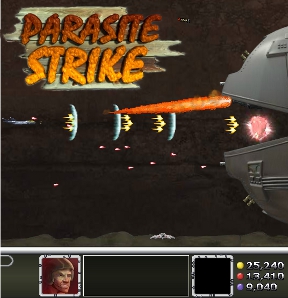 It's been three long years since an alien asteroid landed on Earth, taking over a military base, and while the unfriendly ETs have since been contained within, all efforts to eradicate them have been fruitless. That's where you come in; as Dr. Wesley MacGregor, you've developed a poison that will kill the alien menace, and thanks to some fighter piloting in your past, you are chosen to deliver the weapon in Dustin Auxier's side-scrolling shooter, Parasite Strike. Control your aircraft with the [arrow] keys while attacking with [C] for bullets and [X] for bombs, though there are two other control arrangements from which to choose. Your defeated enemies will burst into different colored orbs which you collect toward the purchase of a staggering amount of options in the choice of your plane, weapons and gadgets. Not only are there choices in weaponry, but you can also choose the angle and spread of each weapon.

Auxier has made a game with a retro feel that may remind you of the days when playing video games required tuning to channel 3. At a length of just six missions, Parasite Strike may feel short, but with six additional secret missions, four ranks to achieve in each mission and four difficulty settings keep this game interesting enough to kill all the aliens again and again. Sure you blazed through the main missions on easy difficulty your first run through, but how far can you get on INSANE? If having a highly customized ship doesn't get you, and you couldn't care less about pixelated whatever, then you have to play just to kill the aliens. Nasty, parasitic aliens.

I'm not understanding weapon and ship exp pts. I thought you might be able to use them to purchase upgrades, but I don't see it.

nevermind, I see it now. you can upgrade each weapon/ ship after you purchase them...

after 5 levels the game hangs

ok, found all except level 5. I've run it at least a dozen times now and can't find the 2nd exit.

Secret levels locations are revealed in the tips, eventually, so keep an eye out for those if you have trouble finding them.

Quite an addictive game overall, but I was disappointed by the upgrade system. Most planes are useless, the game is basically to buy the best plane and weapons straight away and never change again. The special items were not too interesting either. The money / XP ratio was also odd, leading to a lot of waste. But maybe I'm being too negative.

I agree with chyro's analysis, and will add that once I sat through the ridiculously long intro sequence, I found the game *very* easy to beat on "easy" level -- I died 3 times (once of my own stupidity in buying but not equipping a weapon) -- and the stats came up and said "35% complete".

Wait..what? I finished all the levels, beat all the bosses, and ended up with the mac-daddy plane, and I'm still only at 35%?

It was an amusing 20 minutes, but I had no desire to go back and try to deal with the other 65%...because I can't imagine what I would gain.