One Good Game Studio's Parallel Levels is a challenging puzzle platformer with a twist. Namely, that you're always playing at least two levels at the same time... the last one you finished, and a new one with another character, and all blocky minions move simultaneously, so you have to time all your movements to get around the obstacles in both stages onscreen! Just use the [WASD] or [arrow] keys to move and jump and make for the door at the end of each level(s), making sure to grab any keys to unlock doors blocking your way, and nab stars to unlock more worlds. If any character touches a hazard, you'll have to restart!. 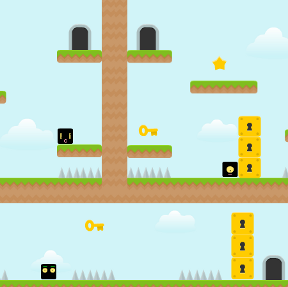 Initially, Parallel Levels is fairly easy thanks to the fact that you don't have to get all your characters to a level's exit at the same time. But as the stages increase in complexity and the number of block dudes you have to control goes up, the game quickly grows teeth. Different worlds bring different elements, like treadmill blocks that push you in different directions and collapsible bricks. So what's the problem? Touchy controls. Movement feels a little slidey, which makes the precision platforming and impalement avoidance more obnoxious than it needed to be. And speaking of obnoxious, why is there no level select for world stages? It's a shame, since Parallel Levels is such a cute idea and has such a great colourful design, though it could have done with its own set of sound effects instead of the Mario ones it appears to be using. If you're patient and have a light touch, it's still a fun and tricky experience, provided you can stave off a rage quit or three.

The controls are bad. The momentum physics aren't set up right, so it feels like you're either crawling or slipping around rather than natural running. It feels really wrong when I can jump from below and to the left of a platform over some spikes onto said platform from standing still, but I have to build up momentum to go back across the spikes to the lower position. And it sticks sometimes too, either acting like I'm still pushing an arrow button when I'm not or completely ignoring a jump command.

I liked the game - nice concept and thought put into the levels. Agree that the controls are a little too loose given that you need to be pretty precise on the later levels.

One thing I thought was missing is that for most levels, it's pretty easy to complete one of the sub-screens without completing the others, which allows you to close them out one by one, making it easier to solve them. Would be better if you had to make moves in such a way that you're completing all the levels at the same time.

Also frustrating is that I was on World 3, had to quit, and when I came back, I couldn't continue from the screen where I left off around level 40 - would have had to start over at the beginning of World 3. Quit the game right there, since I don't have the time to re-do all those levels.

Nice game - would like to see you do a second version of this! -M

One other suggestion - there were rooms that I wasn't able to get all the stars on. If you do a level select screen, you could show how many stars were captured and people could go back and complete any levels they missed on the initial run.