With apologies to Romeo and Juliet, there is no greater tale of romance than the one between a boy and his moon. This gentle love story is chronicled in Paper Moon, a black and white adventure/platform game with a first-class pedigree. It's the result of a collaboration between Flashbang Studios (Blush), Infinite Ammo and Adam Saltsman (Gravity Hook). 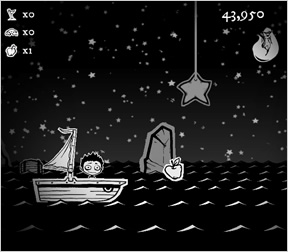 Our hero, a nameless spiky-haired little boy, moves and jumps with the [arrow] keys, but the real stroke of genius here is the use of the [space] bar. Hit it and the scenery will change: objects in the background will "pop" to the foreground and vice versa. With this ability, rocks come shooting out to kill enemies, platforms appear for you to jump onto, and new paths open up to be explored.

Get hit by an enemy or a piece of scenery yourself, and you simply respawn at the last checkpoint activated. The real enemy here is the timer — run out and the quest is over. On your travels, though, you can pick up time bonuses in the form of a handy little clock. Score points for smacking the bad guys with the pop ability and by collecting assorted fruits, racking up combos by grabbing more than one apple or cherry in a row.

Analysis: The gameplay may sound simple, but Paper Moon is much more than the sum of its parts. Originally designed to be stereoscopic, this monochromatic 2D world is exquisitely rendered down to the smallest detail — even the simple lines on the waves in the ocean and the teensy tiniest star in the sky carry the same design aesthetic. Alec Holowka's original score is pitch perfect, and the whole experience is infused with a dreamy retro modern feel.

Every time you play, you'll find something new. There are all sorts of alternate routes to take to your destination and plenty of precious point-giving fruits tucked away in remote corners. Blurst's achievements add to the replay value, and the game is just challenging enough that you'll keep coming back to it.

Put Paper Mario and Tim Burton in a blender and you get Paper Moon, a smooth, sophisticated example of how to integrate design and mechanics into a masterful casual game. Sure, you could cut out your own hand-drawn moon, tape it to your refrigerator and leap about beneath it, but that wouldn't even come close to this experience.

Only good things to say about this...

Wow, this game is just fantastic. The graphics are amazing, but the music may actually be better if you can believe it. And the gameplay is just exquisite...one of the freshest platformers I've played in a while.

I have a feeling the clock is going to frustrate some of the more casual types who really like to take their time exploring.

Personally I think it adds just the right amount of tension to the experience, really driving you forwards as you play.

I'm finding the bit at the end to be terminally frustrating. I can NOT get past the pirate ships. I'm rubbish at the jumping.

Blurst's achievements also cover up what I'm trying to do. The game itself is very well done, however.

I think the Blurst achievements add a good amount of game play to the people who probably would have never given it a second try,
The concept is unique, and the large level makes it possible to want to go back and find out what you missed in the first run, The map gives you more reason to search, though it would have been more of a surprise without it.
Love the inclusion of pirate ships though.

Eh... meh. Cool art, kind of sloppy platforming, popping effect reminds me of Virtual Boy. If there had been some kind of overall mission that made you have to replay to go the different routes that would have been cool... I guess I just don't really care about achievements on a random site I may not visit again... I liked it, and high five for cool music and art design.

Way too short, but I still liked it. The visuals were awesome, and even the platforming wasn't half bad. I have a feeling I missed a lot, though, so I'll probably play again soon.

Paper Moon is great, love the music. Jumping from boulder to boulder with one hand whilst tapping space bar to move scenery is a bit tricky. A really different game which is excellent. More please!

I'm a huge fan of Blurst. I am surprised that you guys haven't reviewed "Minotaur Chinashop" yet. It has managed the impossible: making tank controls fun! It's easily the funniest game since "Robot Dinosaurs That Shoot Beams When They Roar." :-)

[Thanks, we will have a look at it. Please be so kind to use the Submit - Button, right side on top of the page, to suggest games for a review. Thanks :), Kayleigh]

[Edit: We did look at it when it was first released, and the consensus here was that it just wasn't much fun. We realize it was praised just about everywhere else, but none of us here enjoyed it. So, we passed on it. -Jay]

Blurst knocks another one out of the park! Just when I had mentally pigeonholed them as "Those guys who make incredible 3D browser games with Unity", they come up with this amazingly unique game. Yes, it's not as challenging as some platformers, but that's really not the point. It's about zipping about in an beautiful, whimsical environment.

Only complaint that I have is that the replay value isn't as high as some of their other games, like Jetpack Brontosaurus or Velociraptor Safari, which encourage more exploration than you can have in a 2D environment. Still, there are some alternative routes, so I'll say they gave it a good try, it's more the format that limits.

Why does the character move backwards by himself? Having to overcome this by pressing forward is annoying, and reduces accuracy of control in a game with precision jumping. Bad bug.

This game is SO cute and so much fun to play! I also love how many different ways you can go. I played it 4 times before finally giving it this comment!

Hm. You had me until life system.

Also a Blurst fan and also think you should review Minotaur China Shop, which is somewhat of a classic in my opinion.

Paper Moon is a really good game; there is a lot more game here than you might suspect after the first run through.

I agree the rock jumping part is a bit tough, but just take it slow and inch up to the edge then jump and spacebar. With some practice this is not that bad.