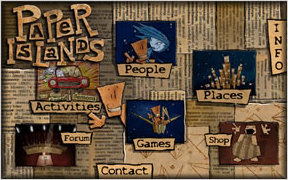 Here is a fresh new site to keep an eye on this new year, created by Dave Jones of Transcience, the same folks behind Chasm.

Paper Islands is a fun site with a unique style and theme centered around paper: paper cut-outs, paper airplanes, origami and the like. Paper Islands features several developed characters with personalities and animations, various locales, activities, and... games. 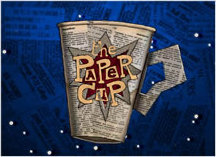 The first game available, the Paper Cup, is a race of paper airplanes through the various locales of Paper Islands. To start, just pick your favorite character as your pilot, and then the race begins. Using just the mouse for steering up and down to avoid objects, and moving right and left to speed up and slow down, race to the finish against the other Paper Islands inhabitants. The race is not easy, and you will likely have to try a few times before you place other than last. But maybe that's just me. The game is charming and cute with a flair that it gets from the personalities of its characters.

The site promises three (3) new games to be released early this year, along with many other features, activities, site improvements and additions. From the excellence of their previous work on Chasm, we will definitely have to keep on the same page with Paper Islands.

Oooh, the Paper Cup is fun beyond the telling of it.
But what's this about placing last all the time? I won on my first try. Guess you just gotta learn to pick Mo. 8)

i picked a cool winged one and i placed 3rd first try!

yay! i got a dude with green wings and won. my first time playing!

This game is fun..the artwork makes it appealing. :D

I got first the first time with godiva.

site is down now

The author's company website and portfolio, Transcience.com.au, still links to PaperIslands.com, so I'm thinking that the issue is only temporary.

I was able to play this today, so whatever was wrong with it, seems to be okay now.

I clicked on the link and got a "this domain is parked" message :(

Looks like the domain's been purchased by a spammer.