Continuing their crusade to brainwash you into joining the restaurant industry, Flipline Studios serves up another tasty simulation in the Papa's games with Papa's Cupcakeria. Instead of being forced to run the new business because Papa is a lazy jerk, this time you're working off a debt. As if making cupcakes to order fast food style weren't inherently hilarious and difficult enough, in addition to cranky customers, batters, frosting and more, you've also got the changing seasons to contend with... and the holidays they bring! 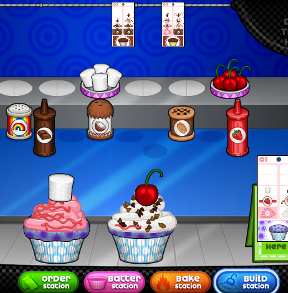 Like all Papa's games, Cupcakeria has a multi-stage process to literally filling a customer's cake-hole. You take down their order, select their cupcake paper and fill it with the appropriate batter (not too much or too little!), bake it until ready, and then decorate it to their exacting specifications. You're scored on how well you perform at each task, which influences both your tip and whether you receive a ticket to play mini-games with. Mini-games, of which there are several, can win you prizes and cash, and money is important since it can be spent on decorations and things to make your bakery function faster and more smoothly. During holiday seasons, make sure to decorate your shop accordingly, as well as make the most of seasonal ingredients. Hey, it works for Starbucks. Get all up in that PUMPKIN EVERYTHING fever action.

Like its predecessors, Cupcakeria is all about the grind, but in the best possible way, and this latest installment offers some minor tweaks that make it a lot more bearable. Customers will now rattle off their order faster, for instance, which is a blessing for the impatient among us who felt our eyes glaze over during the process before. It helps make up for the slow pace as you unlock different ingredients and the difficulty ramps up, though the hardest thing in the game might be mastering that frosting swirl. The seasons and holidays don't have a huge impact on gameplay, but the variation of ingredients and aesthetic changes help to break things up the longer you play, and are a great touch. Having run a bakery for years, I'll tell you that the most realistic part of this game is customers demanding perfect symmetry for their cherries, but you don't play these games for the realism, and Papa's Cupcakeria has fun in spades. I admit, I was hoping for more of an actual storyline this time around considering the debt payoff setup, even if it was just a Tom Nook style racket, but Papa's Cupcakeria is another great installment in a series that keeps improving as it goes, and will keep fans locked behind that counter for a long, long time.

Does anyone have any pointers on how to get that frosting swirl right? It's really hurting my scores here.

Rygar -
I haven't earned a 'perfect' yet on it, but my best method so far is

to frost all the way to the right, then all the way to the left (it won't let you put frosting over the edge of the cupcake), then work back and forth at a steady pace making each spiral smaller. Maybe it works out best if you end in a point?

just wish the games did something 'new'. its the exact same game, just a different food product. Take order, do this, give back, buy X upgrade... i normally can't get past the first week from just sheer... sameness.

Try to make the frosting look like it does on the order ticket--three spirals and a point.

I would like every of these games to be like hotdoggeria.
There you would prepare the hotdog, and serve a drink accordingly. I believe that's the way to do this.
I was dissapointed to see cupcakeria has no drinks.

I wish that this game had a sandbox mode, where you had all the decorations, frostings and such, and no limits, so you could just create your dream cupcake, or the most extravagant and overloaded cupcake ever, or even a minimalist cupcake.

sadly, i barely got through the second level of the last one. they just�stopped adding new things. REALLY new things. it takes too long to get the achievements, and with the IDENTICAL game mechanics in every new game, the only changes being the appearance, it makes you feel like you�ve already completed at least fifty levels and should have the improvements already.

trythe82 has the right idea, i'd love a sandbox mode.

what about making papas cupcakeria easier to play? instead of filling it up with a machine then why don't you have something that tell me when its enough cause I always have trouble with it.

How do i get the filling just right? i keep messing up on that.

Can someone please tell me how to get a high score for the "waiting" part? I always fail because I make the customer wait to long. Also, when doing the icing just go all the way to the side and swirl up and don't make the icing hit a bump that is under it. Another thing when doing the icing only hold down the button for 2 seconds and release (it might help if you count out loud).

The best way I have found is go all the way to the right the first time then when going back follow the cupcake so try make a mini arch and keep doing that, also ending in a point really helps.

haha.. It would be interesting if it does though.. We'll have to keep on expecting, right?

I got 2 perfects on frosting ;-;.... Reply if you have any questions, Though its pretty simple. ( For Me