Please note that this game features short, static ads between game days to advertise the developer's other games. These are placed there by Flipline Studios.

Flipline Studios' enterprising Papa has run a lot of businesses over the years... or, rather, he's conned you into running them, from donut shops and wing joints all the way to the classic pizzeria and beyond. But you know what people love? People love cheese, and Papa's Cheeseria is all about that oooey-gooey deliciousness in the form of fancified grilled cheese sandwiches. You find yourself working for Papa when your gear gets stolen... see, you're a musician, and you were actually supposed to play at the place, but with all your equipment gone, the only want to earn the cash for new stuff is to get to work. Papa's Cheeseria follows the same format as all the rest of the games... each day, you serve customers until closing, where you're cashed out with any tips you earned to spend on upgrades for the store. You'll take a customer's order, prepare and serve it up the way they ask, as fast and accurate as you can before they get impatient and leave. Not only is every sandwich made up of different breads, meats, cheese and condiments, but it needs to be cooked to each customer's desired doneness, and of course, served with whatever fries and fry toppings they like. Sadly, no key binding exists for "press to demand to know what sort of monster puts ranch dressing and ketchup on their fries". 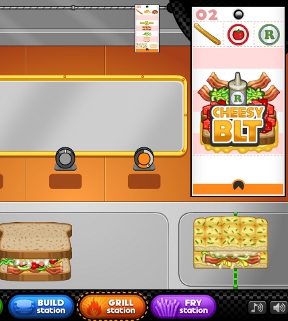 Yes, Papa's Cheeseria is, as you might expect, very like all of its predecessors in theme and gameplay, so if you've been craving something dynamically different to shake up the series, this isn't it. The inter-level ads for the other Papa's games aren't a huge hindrance, but they do feel like a bit much when the game already advertises them on the main screen, and break up the flow of things a bit. As to the game itself, Papa's Cheeseria feels altogether a little fiddlier than some of the other titles, with food cooking time and doneness for main dish and side, special recipes and daily specials, different ways to line up all the condiments, toppings, and more, so things can get frantic in a hurry very early on when you're juggling multiple orders. There's a lot to do, and even more to unlock, especially when all the minigames are taken into account, so you can never accuse Flipline of skipping on quantity for their games. Quality either, of course, with everything from the delicious sizzle of buttered bread on the flattop and the plethora of ingredients themselves lovingly rendered in the developer's signature eye-catching style. Like all games in the series, Papa's Cheeseria looks simple, but clearly has a lot of thought behind it and more going on under the hood... decorating your lobby for maximum "freshness", for example, to help take the pressure off you in the kitchen, and different holidays and corresponding decorations. Flipline clearly takes a lot of pride in their creations, and while it's hard to inject freshness into a beloved series like this without changing too much (or not enough!), they've clearly been working hard to incorporate feedback from all their fans. It's fun, addictive, and, well, now I'm hungry. Thanks a lot, Papa.

Whoa, the things that happen while you're away visiting your grandma! This one certainly has a level of difficulty to it too!

I'm making a prediction. The next one of these will be Papa's...Falafelria.

Escape from the Condo

4,497 Views
1 Comment
chrpa— Jayisgames needs your help to continue providing quality content. Click for details ...and here we have another late Christmas present, the third one, from Neat Escape. The authors have made the original mobile game, which is almost three years old,...  ...

4,413 Views
2 Comments
chrpa— Jayisgames needs your help to continue providing quality content. Click for details Welcome to the second visit to the Forgotten Hill Museum by FM Studio! Several years ago, Mr. Larson embarked on a long journey to uncover the secrets of...  ...

5,032 Views
7 Comments
chrpa— Jayisgames needs your help to continue providing quality content. Click for details We escapists got our first Christmas present, a new game from Masa - and it's great! You find yourself in front of an elevator, which you'll get...  ...

8,236 Views
8 Comments
chrpa— Jayisgames needs your help to continue providing quality content. Click for details Hello and welcome to the Christmas Special... which is quite modest. You all know the reason. So to start off we have two games from RoomEscapeMaker that...  ...