Throughout the years, Papa Louie has sold everything from chicken wings to sundaes. Well, now it's Papa's 10th anniversary, and Flipline Studios are treating us to the best food in town in their newest simulation game, Papa's Bakeria. None of your lowly burgers and simple pizzas this time. We're baking pies. Beautiful, delicious, somewhat insane pies. Gingersnap crust filled with dragonfruit and purple yam, topped with white chocolate and kumquats? Coming right up! But in order to reach such dizzying levels of colourful wackiness, you have to start as a simple pie maker with just a few ingredients. Each day, you'll take orders from customers: they'll tell you what crust, filling and toppings they want. Then, you'll assemble the pie, bake it and decorate it, before presenting it to the customer for inspection. The better the final product, the bigger your tip, and you can use the money to buy some very helpful upgrades. In between levels, you can play an assortment of mini-games which award decorations for the restaurant. Dressing up the place will result in increased customer patience and, you guessed it, bigger tips. 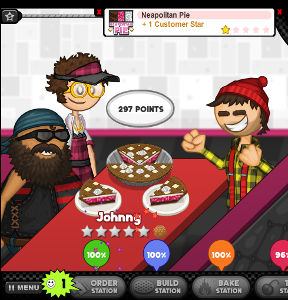 Compared to some titles in the Papa's series, the Bakeria is, dare I say it, almost easy as pie. The greatest challenge remains juggling all the workstations and the shop front, since Papa has no intention of hiring more people to help you out. However, that's a whole lot easier when the actual baking mechanics are not nearly as fiddly as they could be. Sure, it's hard to squirt whipped cream entirely neatly, or to arrange all twelve cherries in a perfect circle. But the assembling doesn't take too many steps and the customers are pretty forgiving even if your baking is not exactly cordon bleu-worthy. Of course, it helps that you can now give them outfits as a token of your appreciation. Sycophantic, yes, but it brings results. This is just one of the myriad of little things you can do and buy when you're not slaving over a hot stove. There are outfits for yourself and your server, stickers, daily specials with bonuses, employee ranks, and lots more, though few of them are new. As with every other game in the series, a different kind of food means different gameplay, but the overall feel is quite familiar, even if you've only ever played Papa's Pizzeria, which came out nine years ago. Changing important features is tricky, especially in a franchise that's been very successful for so long, but if the food is the only major variable, one day Papa will run out of restaurants to open. Papa's Crunchy Cricketeria? Papa's 3D-printed Dinneria? Only time will tell! Until then, why not stick to tried and true recipes and bake a macaron-topped pie with sugarplums and mint syrup? You know you want to!

These games are always fun, but they really need to add a bonus you can buy that makes the 'steady hand' topping exercises easier. I'm playing with a touchpad and a naturally shaky hand so I have soooo much trouble getting those toppings to 100% for the bonuses.

47,975 Views
29 Comments
chrpa— Jayisgames needs your help to continue providing quality content. Click for details Colorbomb (Studio LOOK) released a new game and it's AMAZING! More than a year and a half ago we played - and enjoyed very much - his...  ...

10,654 Views
3 Comments
chrpa— Jayisgames needs your help to continue providing quality content. Click for details It's Friday and after a long time we have a new escape game from a new developer Tiny Carnival. Not long, true, but the puzzles aren't exactly easy...  ...

4,424 Views
0 Comments
chrpa— Jayisgames needs your help to continue providing quality content. Click for details Welcome to Weekday Puzzle! Lovely autumn game by Jon Topielski stands on the border of an escape and puzzle game, and definitely worth a try. Sid Fish's...  ...

5,327 Views
4 Comments
chrpa— Jayisgames needs your help to continue providing quality content. Click for details Hi! New Weekday Escape just arrived! Selfdefiant wants you to escape Wyoming and that is the end of state escapes. It's about time. Amajeto delivered a new...  ...