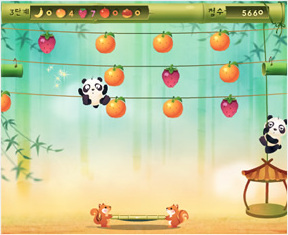 What I am calling Panda Fruit Bounce (actually "Boong Boong Panda") is an action arcade game that is a variant of Breakout. The object is to collect the indicated quantities of fruit by bouncing a panda bear around the play field. A piece of fruit is collected if the panda comes in contact with it.

Once the fruit is collected in the appropriate quantities, golden apples will begin to appear on the clotheslines. You must grab one of the golden apples to complete the level and move on to the next. Special items will occassionally appear on the clotheslines that cause special actions to occur. For example, when the little monkey item is collected it causes all of the fruit on the same line to drop to the ground.

Analysis: The game is full of charm, and is a delight to play. The graphics are gorgeous, and the sound effects fit the mood of the game perfectly. The attention to detail in the animations is also remarkable. I like the way the items on the clothesline bobble up and down as they are pulled from right to left, and the way the chipmunks lift and lower their arms to tilt the trampoline. Some details are subtle and yet add to the richness that this game delivers. The level of difficulty ramps up nicely in later levels with the appearance of fruit that require multiple hits to collect.

An excellent casual game, and a joy to play for gamers of all ages. Click.

Game history: Very kind thanks are expressed to Teny Kim, Flash game team manager for NHN, who wrote to inform me of the history behind Boong Boong Panda, the original name and link to the game. It was developed in Korea in May 2003, and hosted on a Korean game portal named "Han Game" which is owned by NHN corporation (the Korean version appears to support IE 5+ only). The developers later translated a bunch of their games to Japanese and began hosting them in 2004 in Japan. The game was originally developed by Li Gun Hwang and designed by Yoo Jung Kim, and with copyright reserved to NHN corporation.

Thanks for linking Jay!

As you know, I like to credit all the games posted at my site, but I really don't know who is the author this time... :-/

If anybody knows, please tell us!

WOw Jay, thats huge!
just wondering, what do the ninja, monkey, worm and acorn do?

Hey Jay - have you asked the individual who runs ORISINAL? It is kind of similiar to their work. I will do some web searching to see if I can find those characters for translation. Wish me Asian -letter hunting luck!

Yes, DP, I do like how you give the authors credit when you know them. I am curious about how you came upon this one?

Andrea - I am not sure what the acorn does, but most of the others have a special way of knocking fruit off the lines so you can't get them. The ninja, however, adds to your score any fruit it hits as it bounces around. You can also keep the ninja in play by using the trampoline.

Paulina - I am all but certain it is not Ferry Halim's work, though I do agree that the art is similar in style to his Orisinal games.

This game is too cute! ^_^ Hope you find out who made this little gem soon.

Jay,
I love it when you post games for "all ages" ...I have a 4 year old son who loves computer games (in fact, has his own PC already) I've pointed him to your site for cute (bloodless) and skill-building games on many occasions. (The "Grow" games, for instance, are great to encourage logic skills.) Thanks for considering the little ones; they appreciate it too.

Interestingly, watching him play this game, I realized that he is more adaptable with the language than most of us adults... He didn't hesistate in clicking the right places, and only asked "What does that do?" about half as many times as I. :)

Thanks for the thoughtful comment, Karmen. It's a pleasure reviewing the games for all ages, as I genuinely prefer them myself over the more violent kind. =)

And it sounds like you have been blessed with a very smart boy. cheers!

i'm a first year university student who's taking beginner korean and i'm afraid my abilities right now only take me as far as being able to decipher what the title of the game is. it's "Boong Boong Panda"... lol... the font the author used is sort of weird so i had a hard time figuring out what the third syllable was =P sorry that's all i can tell you ^^;; thanks for the cute game Jay b(>O)

I think this is the japanese version:
http://www.hangame.co.jp/gamenc/flash_game.asp?gameid=facpanda
This one is clearly marked as "Copyright by NHN Japan Corporation". Also, this has the working highscore system (also included in the korean file) which makes me believe it might be original site.

Plus, there are many other nice Flash games on the site :)

This has been one of your best weeks ever. Between Escape from Rhetundo Island, Twin Spin 3, Gun Run and this, I've basically had no time left at all...

It seems that the game that Jay introduced to us is a Korean version and the one tonypa gave us is Japanese.

Jay - I think I found it at a "pirated" collection of games. When this happens, I use to simply take the game and I try to find the original site and, if I can't do it, I post it as "Unknown" until somebody as tonypa opens my eyes. Thanks tonypa! :-) :-) :-)

Thank you, Tonypa. You're the man with the game links. =)

And thanks Carmini for the "Boong Boong Panda" Korean translation. Now that we have the rightful Japanese version, maybe we can get the original name translated by one of our Japanese-speaking visitors. =)

When i click the pic or the link it takes me to some screen where i (i think so) have to give my name or something but earlier it just took me to the game..What can i do?

Mirkku - did you read the update I just appended to the review? I believe it has the information you seek. ;)

If you want to save/see highscores in japanese site, you need to register first. I managed to do that without understanding a word of japanese. I am currently trying to get into top 2000 :)

You can still play it without regitration too, just your highscores are not saved :)

Now that there's a japanese version, I can be of some use.

The name is the same in Japanese. Bon Bon Panda. That's romaji, so the "bon" would be pronounced like "bone" in english.

Now for the items. Even though I'm sure most people can figure them out just by using them.

The ninja item can pick up fruits for you. You can also bounce it off your trampoline to keep it going just like the panda.

The acorn makes your jump speed higher? At least that's what the description says. Yeah, I think the guy above was right. It makes your little squirrel guys more faster.

The lightning, which I've never seen, will cause the panda to fall if he gets hit by it.

There really isn't much to translate. You can tell what the rules are just by looking at the picture next to the instructions.

I'm glad you found this game. There isn't many Korean games that's as cute as this that I've seen in a long time

I think the correct translation for the game would be something along the lines of Chubby Panda, although I'm not entirely sure of the romanji... : ]

The title is Pung Pung Panda
[like poong poong panda, an oo sound]

The ninja like Daddaluma says, picks up fruit for you, but you have to keep bouncing the panda : D

To clear the all rounds, all you have to do is get the shiny lemon.

This game's quite cute ^^

I'm a Korean gamer quietly watching your site everyday looking for new neat flash games. (thanks for the good work!)

the name 'boong boong panda' means something like 'a flying panda'..
the expression 'boong boong' cutely describes the movement of a flying object.

and as Kuro mentioned above, the squirrels do say 'She Jaak(start)'

and here's the official address for the Korean version: http://flash.hangame.com/facpanda

If other Korean flash games come up, I think I will be able to provide more help :)

Hey Jay......Where is all your scary halloween games? It is the middle of October! Lets all get into the SPIRIT ..... wwwhhhooohhhhh! Thanks!

I'm a Korean gamer myself, and I really enjoyed this game!

Has anyone found out how many levels there are?

Hello, Jay.
I developed this game and
other 20 games in flash.hangame.com.
I converted this game to japaness version too.

Thanks you for posting this game.

Just for clarification.
The rightful copyright owner is NHN Corp., a Korean company. NHN Japan Corp. is its Japanese branch, so that's why it's serviced at Hangame.co.jp in the Japanese language.
You can play the original Korean version at http://flash.hangame.com/facpanda where you can see it says "Copyright by NHN Corp."
Jay, care to correct the copyright info for the sake of accuracy?

Thanks, Shannon. I received an email from the developers of this game just a day or two ago and yes, I do plan on updating the entry with the information they provided. I just haven't had time to do that yet.

also..
like this game, but
the japanese, Daddaluma correctly identified the character but its not two dots on the upper right of the character its a circle.
so its pronounced, similarly to the korean, "pon pon panda" theres no "g" at the end...

^_^ sorreh, nitpicky when so called fluent-in-japanese or i-can-so-translate-that-for-you people get it almost right, but in the end botch/ravage the pronunciation...
:)