Outwitters is an asynchronous multiplayer strategy game from One Man Left, the creator of the equally captivating mobile game Tilt to Live. Outwitters takes place on a hex grid and stars three races of characters, each with a handful of unique units. By steadily moving soldiers across the board, deploying specialist healers, scouts, and the like, each team vies for control and the ultimate destruction of the other side's base. It's the most intense experience you can have with chubby pink soldiers and a field full of fish fighters! 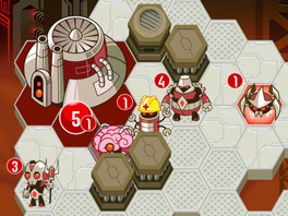 Your currency of choice in Outwitters are Wits, a catch-all number that dictates just about everything you do. Starting with a small spread of troops, you can move units during a turn at the cost of one Wit each. You can also create new troops, but that costs a lot of Wits, making it something you have to save up for. Soldiers number in the half dozen for each team and come with a variety of strengths, weaknesses, and special abilities. Basically, each side will have a weak, fast moving unit, a strong, tank-like unit, healers, long-range units, and so on. It's almost like a rock-paper-scissors type of situation, just with a little extra complexity.

Outwitters is a multiplayer-only game, but that's where the whole asynchronous part comes into play. Start up one or several games at a time and you are automatically matched with an opponent. You take turns moving units, and when a turn ends, the actions are sent for the other player to see, sort of like the old play by e-mail games. You're not playing a live, simultaneous game, which makes things a bit slower but also much it more tactics-oriented in nature. A good analogy would be setting up a chess board on a table in your home. You never sit down and play, you just make a move each time you pass by, hoping your roommate has made his opposing move when you do. 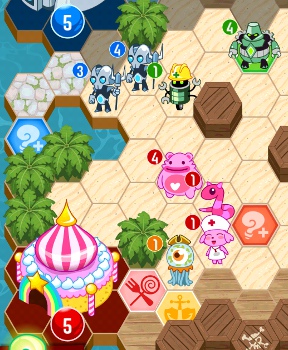 Analysis: Outwitters looks absolutely adorable, and that's going to be a big reason many mobile players will end up grabbing the game. It's also very easy to get into, as you don't have to worry about memorizing unit statistics or anything like that. Just create a game, do some experimenting, and after a bit, you'll know exactly what's going on. Over the course of a dozen or so new games, you'll refine your tactics until you've got Outwitters down to a glorious turn-based science!

The only drawback to Outwitters is that it takes time to play. Not large chunks of time, but frequent bites of time, sort of like a real-time simulation game akin to Pocket Planes. Outwitters doesn't have a single player option, so you can't just sit down and roll through a game. You can only start up a few multiplayer games, make some moves, and come back later to see if your opponents have done their thing. Instant gratification goes through a bit of a delay, but there's always local multiplayer and the rare player who sits down and makes moves while you're online.

Now for the in-app purchases. Outwitters is free by default and includes several maps, full access to the various multiplayer modes, and one of the three teams to play as (the fish-based Scallywags). You can grab two packs, one for each of the other teams, and get access to new characters and a few additional maps. You can also grab a single pack that gives you access to every current and future team pack the developer releases, which definitely isn't a bad deal. Outwitters is absolutely playable and enjoyable without indulging in the in-app purchases, but they add quite a bit of value if you end up getting hooked on the game.

Despite its somewhat stalled gameplay due to the multiplayer-only setup, Outwitters still manages to be a thoroughly interesting game. The tactics you'll employ are simple to implement but difficult to master, and it requires a certain subtlety you'll only gain after dozens of rounds. The single player campaign mode is sorely missed, but there's still a lot to love about the game. And the best part is you don't need to be a tactics master in order to enjoy it!