Oscura is a dark and shadowy mobile platform game created by Chocolate LIberation Front. The silhouette-based visuals might remind you of games like LIMBO, but Oscura is much more grounded in action, preferring exaggerated leaps over more limited, realistic physics. Some of the levels feature horribly frightening phantasms, not all of which come in the form of moving enemies. But the visual design is one of Oscura's strong points, and you'll find it's both a graphical treat as well as a platform player's dream. 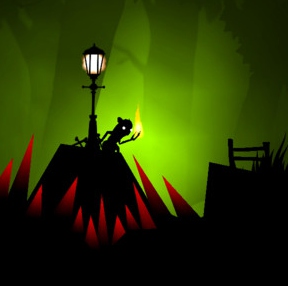 A lighthouse burns in the darkness, keeping the Dark Creatures at bay with its ray of light. But when the power crystal explodes, sending shards across the island, the invisible terrors that once lived in the shadows step forward. Controlling a spindly little character with a glowing hand, your job is to collect fragments of light so you can chase evil from the land. As soon as you see some of the nightmares that are running amok, you'll be sure vanquishing them is a very good idea. Your powers are fairly limited, but you do have a useful time-slowing ability that can be unleashed to help you work through difficult parts of a stage.

Oscura features a good (albeit short) set of levels that focus on action and item collection. The enemies are largely meant to be avoided, and some of them even give chase, which is a terrifying ordeal every time it happens. The game relies on atmosphere and mood, and because of its luxurious visuals, it absolutely succeeds on both fronts. It might come as a surprise, but Oscura is one of the rare platform games that works well on a buttonless mobile device. Part of this is the game's overall design, but part is the unique control set-up that is more user-centric instead of plain old virtual buttons. You can swap the controls in the options menu, but the default settings work wonders once you get used to them.

Oscura is best played in the dark. With a stuffed animal nearby. And a flashlight, just in case you really start wondering what's hiding behind the shadows in your room.