In 19th century America, everyone has gold fever. "Westward 'Ho!" was the bugle call of the day, as families hitched up their wagons and journeyed forth on the often 2,000 mile trek in search of riches in gold, silver and unclaimed land. But you know the story already; chances are you also played some version of the iconic resource management/adventure game, The Oregon Trail, as a kid. Now you can share in the '49er nostalgia wherever you go because GameLoft's release of this classic game is available on all mobile devices. 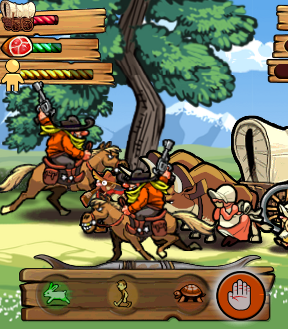 Playing The Oregon Trail vacillates between a multitude of mini-games that test your reflexes (such as hunting, fishing and wagon repairs), reacting to obstacles along the trail (including bandits and eagle attacks), interacting with historic figures who issue side quests as well as trivia, and a fair bit of watching scenery pass by as you progress. All this is perfectly suited to the touch screen although at times you'll even ford rivers using the tilt function of your device.

Before starting out, you're given the option of instant play or regular play. In regular play, choose your profession and wagon type to determine starting bonuses. You can also name your spouse and kids but don't get too attached to them; death from disease and disaster on the trail was not uncommon. Much of this is mitigated by supplies you can purchase in settlements and general stores for coins (easily earned through mini-games and side quests) or cash (an in-app purchase) if you want to keep things on the easy side. Yet if you select "easy" mode, your arrival at Oregon intact is virtually guaranteed no matter what the circumstance or how readily supplied you are. Those who prefer to gamble on their mortal outcome—and by turns encounter more minigames—can select difficult, hard, or extra hard mode ("Yer as likely to stumble upon Atlantis as reach Oregon!") 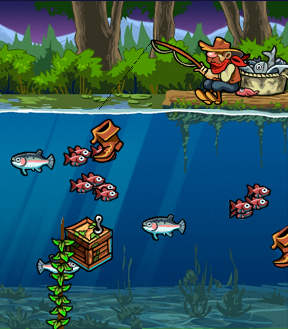 Analysis: The trek along the Oregon Trail was long and arduous in real life, and some of that is reflected here, especially if you choose a more difficult mode and move at a slow pace. If you're the impatient sort, watching as eye popping cartoon scenery passes by may quickly lose its appeal, despite the superb quality of graphics. Even so, the mini-games and bonus quests pop up often enough that you'll be watching in anticipation for such random outcropping of events. Enough strategy and decision making are involved—as in choosing routes, outfitting your wagon and bartering—to bolster a strong sense of accomplishment each time you arrive at a fort or resting spot.

There's a great deal of active enjoyment in the gameplay itself yet, admittedly, for those of us who hold warm memories of the original educational game, the major portion of charm comes from the iconoclasm of the game title "The Oregon Trail" itself. Even so, all ages will have fun with this blend of arcade and adventure. There's enough new-fangled attributes to keep game savvy preteens and teens satisfied, too. Along with an upbeat tone and humor, mixed with just the right bits of real time strategy and informative clips, it pans out to be an entertaining venture that captures the pioneering urge in all of us.

NOTE: This game was played and reviewed on an iPhone 4S and Kindle Fire. Game was available in the North American market at the time of publication, but may not be available in other territories. Please see individual app market pages for purchasing info.

Pretty decent game, though not nearly as difficult as the first 2 versions of Oregon trail for the computers.

Also should note, this is also availiable on the Windows Phone Marketplace.

Is there an animation for dying of dysentery?

I didn't see an animation for dying... but I played on easy mode and as much as I neglected my sick kids (bad frontier parent that I am), only one of them died...the rest eventually recovered. The one that died just disappeared from the screen.