Penny Arcade's On the Rain-Slick Precipice of Darkness: Episode Three

If you work at a place called the Startling Developments Detective Agency, there are things you just get used to seeing. Unholy mime cults. Time-traveling dinosaur super spies. Hands imbued by the purest of all urine. But even Tycho and Gabe might not be prepared for what happens when the ancient book, the Necrowombicon, goes missing right around the time hostile creatures start flooding the streets of New Arcadia and reality starts trying to tear itself apart. If this is all in a day's work for them, they'd better have some seriously shiny benefits packages. Zeboyd Games teams up with pop-culture icons Penny Arcade to deliver a delightfully twisted and off-kilter turn-based RPG experience in On the Rain-Slick Precipice of Darkness: Episode Three. While the first two installments were originally developed by Hothead Games, no experience with them is necessary. 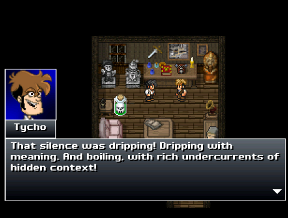 Move your intrepid party with the [WASD] or [arrow] keys, and interact with people or objects by hitting [enter], while [tab] or the [spacebar] opens up a menu where you can view your characters' status or save your game at almost any time. Almost any time, I say, because it's sort of hard to concentrate while getting beaten in the face, and that's something the Startling Developments Detective Agency apparently has to deal with startling regularity. I don't know why. It's not like Gabe's an antagonist and Tycho's an insufferable elitist or anything. All battles can be seen as monsters on the map, and when you encounter one, you'll automatically engage in fisticuffs. Some of these challenges will come with special conditions that can help or hinder you, such as more powerful enemies or a boost to your own strength.

These fights are traditionally turn-based, with heroes and enemies attacking according to the gauge at the top of the screen. Regular attacks are free, but special class abilities need to be used with Magic Points, which accumulate one per turn throughout the course of the fight. These Magic Points don't carry over to the next battle, but upon victory your party will be returned to top health, so there's that. Additionally, your items can only be used a certain number of times per battle until you upgrade them. If you want to get even fancy, or just survive, you'll want to learn how best to take advantage of Class Pins, which can be equipped to add new skills and the like to different characters. Dare you unlock the masterful prowess of the Elemenstor... the Gardenar... or... the Slacker?! 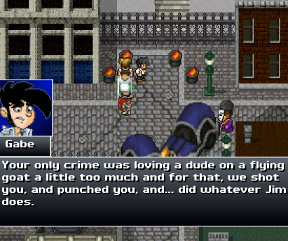 Analysis: On the Rain-Slick Precipice of Darkness is a series that's had its fair share of bumps in the road, with the first two installments being made by a different development team. Episode Three is, to say the last, a vastly different beast from its spiritual predecessors, and there are certainly going to be things you'll miss from those titles if you were a fan, such as the ability to create your own character. That said, however, taken on its own merits, Episode Three is still a very robust and likable little title that manages to capture the breezy dialogue and story of the previous games without feeling like it's straining too hard in the process. The balance between absurdist, frequently vulgar humor and an occasional attempt at serious storytelling isn't always a perfect one, but the game still manages to pull off a lot of funny moments and some intriguing plot developments that build on the world and the characters within it. 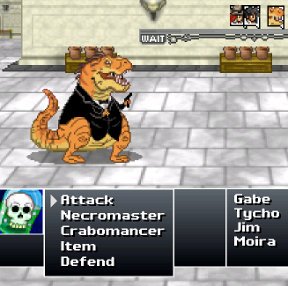 Unfortunately, the lion's share of the gameplay that comes down to crawling across maps battering enemies can tend to drag a bit. It feels less like exploring in a traditional RPG adventure and more like hammering a blockade apart bit by bit to get to the next portion of the story. There's just not enough to do outside of battle when you're not watching characters talk. The battles themselves, however, do tend to feel pleasingly strategic, especially when special conditions come into play. Figuring out the proper way to take on a big fight is satisfying, and seemingly impossible challenges can be handily dealt with if you're kitted out in the proper Class Pins beforehand. Since there're no random encounters, there's also no grinding, so you have to think about every fight you come across if you're having trouble and adjust your strategy accordingly.

On the Rain-Slick Precipice of Darkness Episode Three will, for a lot of players, live or die by its combat, and if you don't enjoy the fighting then chances are you'll feel the game start to drag a bit before long. I found myself needing to take breaks from its relentless battles, but I also kept coming back to it. Fans of strategic RPG gameplay will definitely find a lot to sink their teeth into here, and it's hard not to find yourself compelled to keep discovering more about New Arcadia and the heroes and weirdos within it. If you played the first two games in the series then chances are you'll find yourself wishing you could have had the opportunity to continue your own adventures with Gabe and Tycho, but Episode Three still delivers a robustly challenging and frequently funny old-school RPG experience that's heavy on wit, offense, strangeness, and retro style.

On the Rain-Slick Precipice of Darkness 3
Walkthrough (with maps)

At the end of the second level of the Temple of Man, Tycho will prompt you to return to the Periphery. Exit the Temple and go back to the Hark House. Enter the portal there and go through the door on the right that you were unable to go through before. Inside, there will be a few fights before you reach a powerful enemy at the end, who will drop Tycho's weapon the Wonderbuss upon death.

If you want to grind, you can, just go to the Arena (which opens up immediately after the you've finished the Pier IIRC) defeat all enemies you can, exit and reenter, repeat.

It doesn't seem to be necessary, although I'm not sure if it's possible to master all class pins without some Arena grinding...

On the Rain-Slick Precipice of Darkness 3
Walkthrough (with maps)

At the end of the second level of the Temple of Man, Tycho will prompt you to return to the Periphery. Exit the Temple and go back to the Hark House. Enter the portal there and go through the door on the right that you were unable to go through before. Inside, there will be a few fights before you reach a powerful enemy at the end, who will drop Tycho's weapon the Wonderbuss upon death.