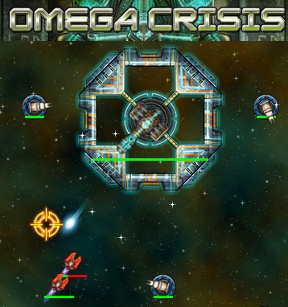 Captain's Log, Stardate: Made-up numbers. Omega Crisis from developer Lucidrine is a hybrid defense/shooter/resource management game set in the wild... uh... black yonder. The plot is fairly predictable; after discovering a new star sector rich in energy to gather and space to experiment in, your team finds yourselves under attack by hostile alien forces who, strangely, don't appreciate you plunking down into their territory and proclaiming you own everything in it. Your job is to hold them off long enough until James Cameron can make a movie about it and people can start entire internet communities dedicated to worshiping fictional ways of life. Wait, I mean, "hold them off long enough for you to gather resources and build your defenses". Don't know how I could possibly have confused the two. Well, whatever, it's not important anyway since, as we all know, it all comes down to who has the biggest cannon. And right now? That's you.

Omega Crisis is played with a combination of mouse and keyboard; point and click to shoot your cannon, and use the keyboard controls to pan around the area and locate incoming enemies. A warning siren will go off whenever enemy ships are about to appear, indicated on the map. It's in your best interests to shoot down enemies before they get close, not only so you don't, y'know, die, but also to earn tech points you can spend on upgrades between levels. (If you want, you can also replay levels you've already won to earn even more points.) You'll also earn resources that you can use to build more defenses by shifting into management mode; tap the [spacebar] to bring up a grid you can build on. You can only place a certain number of defenses, as limited by your power supply, so think carefully about what each stage throws at you to get the most out of your resources.

Keep an eye on your base's health bar, and on the timer in the bottom left that counts down to each new enemy attack. The further you go, the stronger your enemies get, but you'll gain access to stronger weapons and even gain a warship to help along the way. Although your base heals all damage between levels, your defenses do not carry over from level to level. This, I believe, is best described as SHENANIGANS syndrome. 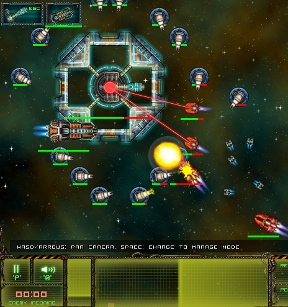 Analysis: Lucidrine is rapidly becoming known for space-faring, high action adventures, so this slower paced defense/resource management hybrid was a bit of a surprise after the frantic intensity of, say, Cube Colossus. Omega Crisis is still very polished, but the comparatively slower gameplay makes it feel a bit restrained; more tense than adrenaline fueled excitement as you watch enemies swarm towards you and your defenses struggle to keep up.

Early on, the game is exceptionally easy if you find and park yourself over the enemy's entry point as soon as you hear the warning siren; this lets you simply lay down a continuous stream of fire that obliterates them the moment they emerge. As stronger enemies begin to arrive, however, and from multiple directions at once, juggling them all becomes a bit of a challenge that forces you to think strategically about using your defenses. Some stages also make an effort to increase the challenge by disabling your main cannon, forcing you to rely on carefully placing your defense systems instead. The downside is that enemy AI is still extremely limited, and ships tend to just fly straight towards you making no effort to avoid fire. The game makes some effort to explain this, but I'd still expect something more from an advanced civilization.

At only ten stages, Omega Crisis is more of an appetizer than a full meal; even if you replay stages to earn more upgrade points, you're probably only looking at a few hours of play rather than a full starfleet career. Despite a few bumps in its design, and the lack of any real story to speak of to drive you forward, it remains a fun challenge to sink your teeth into, if only for a while.

After the dialogue box saying something like "Our scientists have taken the data etc" the game just freezes. Bolts stop in mid air and only the pause button works.
What's up?

The second paragraph has the following sentence:
"A warning siren will go off whenever enemy ."

TaintedDeity, I don't know what the problem with your game could be. Please remember when reporting bugs that it's important to post your operating system and browser versions so we can narrow down the problem! Thank you. :)

Just to say I've got through to level ten but don't seem to be able to upgrade any of my armaments past level 2...despite having researched them higher than this.

Seems to be a bug, unless I'm missing something obvious!

Hmm... I really don't know why this wasn't just another "link dump friday" entry. Only 10 levels, unimpressive gameplay, etc. There isn't anything "wrong" with this game, but there really isn't anything that stands out about it that calls for a full review.

Sometimes there are games that are put into the link dump friday batch that have a lot more going on than this one.

Does it say how to get the Warships to move, and I just skipped over it? Pushing Esc did nothing, and the warships just float there over the base, sending fighters to swarm anything that only attacks in the direction the warships are stationed, starting to head back whenever their current target breaks. If they could move, they'd be good for softening up incoming targets; if they're stationary, then they're sort of a last-ditch defensive option.

"The warship is not equipped with weapon systems", instead of "is not equipment with...". Though it does give the game a slightly humorous, Zero Wing-style feel for that stage.

Gar: You can use buttons 1-4 to select the particular warship - this is then under your command and you can direct it to wherever you like by clicking on the appropriate spot. That's the limit of your control though, you can't give it orders or control the fighters' targets.

Pressing escape then reverts your control back to the cannon.

Minor warning for English nitpickers - this game is full of glaring grammatical errors. Nothing game-breaking at the slightest, but it can get annoying.

You can move warships by pressing 1-4 (or by clicking the warship icon on top left) [switch back to gun by pressing ESC or gun icon]-> this allows you to select the warship, and it will move to where you click your cursor. Mind you that warships have pretty bad armor at the beginning, and as noted has no weapons whatsoever (fighters have low level gattlings), so it literally is a last ditch defense.

To upgrade, you need to make sure you have enough $$ and power (for the upgraded structure!). If you don't have enough of both, then upgrades remain locked. I upgraded my gatling guns to lvl 2 by stage 4 and to lvl 3 by stage 6 (and by golly I need it!)

Maxiumum power lasers are way overpowered compared to any other weapon. I stopped firing my main laser as soon as I got two or three level 10 lasers online until the mothership came. Way overpowered.

Not being able to upgrade anything past level 2 was definitely a bug for me :-( Plenty of power, money, and sufficiently high research but once I upgrade anything to level 2 any further upgrade remains locked.

Having the "impossible to upgrade past level 2" problem here, too.

You don't need to upgrade anything to finish last level...

just surround your base with 32 lvl 1 missiles. They'll destroy everything except the final boss without any help from gun/slow-cloud etc. Make sure you've got max Temporus cloud tech for when final boss comes to keep her slowed though, and put like 8 or so missiles between her and your base to start working on her as she approaches.
When I did it I only had 35 power coz I maxed the warships but it was plenty. Maybe upgrading the gun would be better, but I'm lazy to aim everywhere, or even move the warships actually. :)

I tried lasers too, and TBH the lvl 1 missiles did just the same job, and were a ton easier to use coz they're cheap and don't need to be upgraded or require a lot of tech points.