I'm trying to think of a game that better encapsulates my childhood than OK K.O.! Lakewood Plaza Turbo and I can't quite do it. Free for iOS and Android, it's an action-packed brawler filled with evil robots, aliens, punching, and a whole lotta neon. See, the eclectic folks of Lakewood Plaza shopping center have been fending off the evil Lord Boxman, who wants nothing more than to take the place over and put everyone out of business, including exciteable kid dynamo K.O. and his butt-kicking mom, Carol. When a mysterious energy drink leads to the destruction of the plaza and scatters his friends across town, K.O.'s got to bring them home and rebuild the only way he knows how. With punching. And kicking. Throwing, too. Probably smashing. Simple to play and full of (weird) personality, OK K.O.! Lakewood Plaza Turbo piles on the old school charm with a heaping helping of enjoyable silliness for a simple but fun classic punch-em-up. 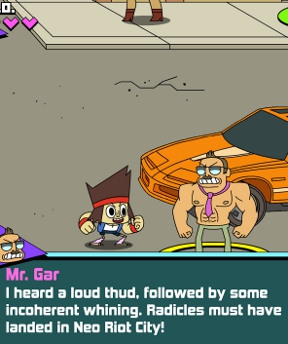 To play, just move your finger around the left side of the screen, and tap on the right side to punch or interact with whatever you're closest to. You'll learn new moves throughout the game that you execute with different gestures, like a sliding kick with a swipe, so don't get too dependent on your fists since some enemies require different strategy. K.O.'s health is represented in the upper left corner, and in the upper-right, you'll find the pause menu, where you can check your map, quests, and items. Slain enemies drop health sometimes, but also coins that can be spent back at Plaza stores for healing or other helpful items. If you like, you can even opt to watch a short video ad to get a free item or some coins. If you don't want to, well, don't! You'll find plenty of cash to buy things by beating stuff up. OK K.O.! Lakewood Plaza Turbo manages to inject just enough strategy into its combat to keep it from being all about mashing buttons. Throw mines at enemies, for example, or knock them down with a sliding kick for an instant knock out with a ground slam! It's simple, but it works, and the different types of enemies ensure you'll need to keep moving to blast through their ranks.

The touch-based controls are simple and mostly responsive, though O.K. doesn't quite move fast enough to make engaging with several enemies at once feel as fluid as it should, while you'll need to be very careful with your swipes to pull off the correct move in the heat of the moment. It can get a little repetitive, since most of the "quests" involve going to one place and smashing everything in it (sometimes picking items up along the way), but while it starts off almost painfully easy, the game quickly gets trickier after you've got several missions under your belt. Being able to wander the maps at will as you unlock them is a nice touch, and you'll find most enemies, and characters, you encounter are all as suitably weird as the premise demands. There's the weird rose-sniffing sultry stabbing bot. The weird burrito-slinging goblin that runs the food cart. The weird shouty shirtless man who runs the whole plaza. It's exactly the sort of colourful, chaotic assault on your eyeballs kids of the late eighties and nineties will remember, brought to you from the mind of Ian Jones-Quartey. It was originally conceived as a cartoon several years ago, whose pilot you can watch online right now, but from February 12th to 14th 2016, Cartoon Network is holding a game jam for Portland-based indie developers to make their own titles based on the cast and setting. OK K.O.! on its own, however, is pure nostalgic childhood fun. The characters, whom you get to know through cute animated cutscenes, carry along its oddball plot very well, and make it the sort of game kids will likely get the most of, but parents and the rest of us oldsters will still get a kick out of, too.