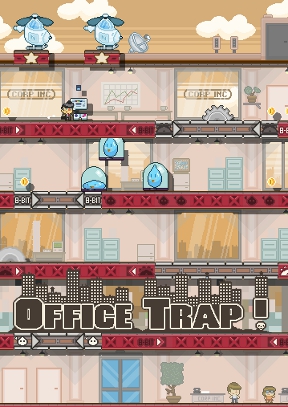 Kids, let me tell you something; it's a dog-eat-dog world out there. Adults would have you believe that you just make sure you're qualified, don't smell, and fill out a few forms and then BAM; employment. But that's a lie. Heck, to get my job here, I had to wrestle my predecessor to the death Star Trek style, which was actually harder than it sounds since my predecessor was a remarkably clever baboon who liked to go for the eyes. My point is, you've gotta be ready for anything, and Nitrome is going to help toughen you up for the world of employment with Office Trap, a modern snarky spin on Knight Trap.

If you want to keep your new job in this arcade platformer, you'll have to survive the Office of Doom, which means getting a certain number of employees to the helicopters at the end of each level. (Remember, there's no "I" in "TEAM"... but... there is a "ME", so... uh, nevermind.) Just use [WASD] or the [arrow] keys to run and jump and make your way up through the floors, avoiding all the typical office hazards (like toxic waste, buzz saws, low-res traps, and more) to reach safety. Getting to the helicopter is usually fairly simple, if hazardous, but snagging all the coins and stranded employees to boost your high score (imperative for your performance appraisal I'm sure) is the hard part. If you have a friend you can coerce to the keyboard, you can also indulge in a little multiplayer action.

While Office Trap's gameplay and concept are pretty familiar to anyone who played Knight Trap earlier this year, it avoids feeling like a lot of same ol', same ol' by providing not only a great new design, but a lot of traps and obstacles that are unique to this game. The low-res trap is particularly fiendish, since most everything on a floor becomes virtually unrecogniseable once it's activated. Seeing what else the game decides to throw at you is a great incentive to progress, especially since it's all rendered in Nitrome's signature pixel style. (Death by treadmill fireball incineration was never so cute.) It's still going to be hard to shake the sense of déjà-vu if you've played Knight Trap, and some traps are definitely a lot more frustrating than they are entertaining (I DEFY YOU, WATERFALL), but Office Trap has loads of charm and is more of that run-y, jump-y, turn-into-a-skeleton-y action fans will enjoy. Besides, it's important you get toughened up for the real world. If you can't crawl through a deluge, leap over fireballs, and snag the spring-loaded key, how are you ever going to use the copy room?

Okay, what the heck? After the introductory screen with the E-mail from the CEO I just go to a white screen with some icons in the upper left, and I can't do anything else.

On the third floor down from the top in that screenshot, I love how the office has what looks like happy bouncing blue test subjects in just a dome without the robotic suit. Don't know from the picture if they're good or bad (presumably bad since they don't look like employees), but imagine if they did have the suits... Hm... Maybe if they were blue test subjects... they would... help you...? Or would they be from the sequel and really be bad because they don't know any different...? But would their upbringing in the scientist's lab start to show through and they become morally conflicted, leaving you just enough time to squeeze through...? Wouldn't make a very good trap though... aside from maybe distracting you by sharing a food pellet with you long enough to cause you to fall victim to a trap coming up from behind...

I must go now and ponder this profound conundrum...

@Svarta: I assume by the nature of your comment that you couldn't get the game to work either?

The game is taking a while to load, but it's loading alright.

It probably just takes time to load the loading screen...it's what you get for playing flash games with an incredible file size.

It is not loading, I do see the icons and the white.

Perhaps 'cause I use a Mac?

But 5 minutes for one level is too long, perhaps this is the game!

I couldn't get past the blank white screen either. On Firefox or Chrome.

The game is playing just fine for me, but what's annoying is the controls locking up on me all the time! Is it just my computer?

Okay, I updated to Adobe Flash Player 10.3.yadayada and... it works just fine now. How about that?

Okay, technical issues aside, Office Trap is... interesting. Nitrome has made sequels to their games before, but a complete reskin? That's a new one. Wonder if they'll give similar treatments to any of their other games.

Also, I will choose not to interpret this game as a critique of the current American job market. Mostly because Nitrome is based in England.

This seems all too familiar- Knight Trap, anyone?

Astonishingly tedious. That is, the gameplay is fun, but the mechanism where you have to get multiple guys to the roof helicopters- that is an explicit chore. I could not convince myself to play through Level 3 four times.

i fail to see how coming into contact with a flower would strip you down to a skeleton.

One would hope that game producers (especially an established one like Nitrome) would be able to test not-that-particularly-old versions of Flash, and then at least put up a "Sorry, you need the bleeding-edge latest version of flash in order to run this new version of a game that ran perfectly fine on your old version of Flash" warning.

[I wouldn't blame the game developers for failing to keep up with Adobe's crazy rate at which they're putting out (oftentimes buggy) Flash Player versions. It's quite possible the version you had was the problem, so blame Adobe for your issue, not Nitrome. -Jay

I believe that may make a difference. It did for me.

[Actually, no, they're both exactly the same link, believe it or not. -Jay]

Nope. I got different icons on my screen.

But the game LOADED, it's just when you try to play the first level (the only one you can get to immediately), you get the intro from the Boss and then a white screen. First time was 4 parachutists, 2 colored and 2 greyed out. Now it is 4 things that look like Saturn. 2 are dark grey and 2 are barely visible.

A reload worked, for some strange reason.

Did anyone see the Scooby Doo cameos (minus Shaggy and Scooby)? I don't think I saw one on level 1... Level 5 had Daphne hiding. Level 6 was entertaining, but where did the girls go for 7? Did the *princess* statue scare them off?

My comments on the traps (spoiler'd because of length):

You will be safe directly above where the saw chain is attached. It moves fast through the air but is slowed by the walls and floors.

Why are the bloblets in jars? Is it a "test subject blue/green/arena" reference?
Wow. I can see why Dora hated the waterfall trap.
The flower trap has such a bland death scene. Why is one of the 2 blushing?
The temp/prospective employee is allergic to bees?
Careful of the workers!

If one of the workers gets hit by a trap (like a fireball), they will die and you miss out on a reward. These workers will also run TO you, setting off any traps they step on...
There is another type, a girl I think, that runs AWAY from you. She still gets the little hearts when you touch her, though.
There are two more types of *workers* that I've seen. One is a balding guy that doesn't move, while the other is a gray-haired man that wanders randomly around.

Stupid rent-a-robo-cops! They appear to be able to sense you a level above/below! No, when you move! No, when...I can't figure it out...
Kitty! "Jobhunter wants kitty"? No, he does NOT!
Radioactive -

If your guy gets hit, he turns into a zombie. BEWARE HIM! He can then turn others into zombies! However, he will not trigger traps.

What's the *safe-face* thing supposed to be?
What's up with the stupid *bosses*?
The *C* or *U* trap - Don't try and quickly slip past. It won't work. You can't jump through the caution wall, but if you are caught by the turn...pancake.

Cool! I managed to die before the apex of my jump, so my skeleton got bumped to the next level up, where it's IMPOSSIBLE to die! Luckily the bones didn't trigger a trap.

New background on Nitrome site - cool, it reminds me how I miss Dirk Valentine...
BTW - all new games have year 2010 on footer. I wonder if this means that Nitrome ha so many games, waiting for premiere?

New background on Nitrome site - cool, it reminds me how I miss Dirk Valentine...
BTW - all new games have year 2010 on footer. I wonder if this means that Nitrome ha so many games, waiting for premiere?

@Smokey - I believe that background has been on there for QUITE some time now.

I finally reached level 30, but I can't figure out how to get ANY guys past the last segment (with two laser cannons pointing at each other).

TIP: do NOT move to another tab or window on this level. Doing so will cause two traps (that I know of) to synchronize. They are the C/U traps that block off 3 directions (they rotate) and the laser guns. This trait *can* be nice on some levels, but NOT this level.
I don't know if this was intentional or not. I will try replaying the level with the lasers synched.

The ad loads, of course, then the game loads and you can press play, go to level one see the intro once you click the play shaped button just a blank white screen.

A year later, newer version of flash and it does not work.

I'm not experiencing any difficulties with this game. I tried on a Mac with Firefox and Chrome, Flash Player 11.3.300.257. Try updating your Flash Player.