Of Light & Shadow is a puzzle platform hybrid from 12 Angry Devs that focuses on two characters, each with different abilities as well as environmental weaknesses. It takes place in a crumbling world of chaos, with giant frogs, chomping machine monsters, flying platforms and bubbling pools of lava all waiting to take a piece of you with them to oblivion. But, since you're such a talented player, you can survive the surreal stages and work your way to safety at the end! 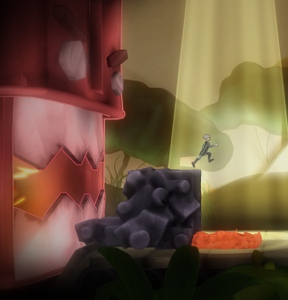 Both Light and Shadow are on the edge of extinction, and if they want to survive, they're going to have to work together. When controlling Light you have a pretty standard arsenal of platforming powers with one big limitation: if you move out of the light, you die. Enter Shadow, a ground-bound character who has the curious ability to stick to walls and ceilings but is unable to jump. In direct opposition to Light, Shadow has to stay in the darkness. Since the decaying world requires both brains and physical skills to survive, you've got to help Shadow and Light make it to the end in one piece, swapping back and forth on-the-fly, oftentimes in mid-jump or while switching from light to darkness!

Of Light & Shadow does a great job mixing puzzle and action elements into one package. The variety is surprisingly strong for such a short (and free) game, and the tense moments when you have to switch characters while in dangerous terrain are more exciting than you'd think! The game also doesn't overstay its welcome, either, and its half a dozen or so levels offer up a few hours of perfectly enjoyable entertainment. There's an emphasis on besting previous scores, so you might actually want to go back and replay previous levels to see if you can do things a little faster. All in all, a great game to occupy a few afternoons of your time, and maybe you'll learn something about teamwork, too?

It's a Microsoft conspiracy! Ok, maybe not. I don't have a Mac to test these with, but apparently there are some homebrew drivers that can get things running. Two useful links in this forum thread:

Again, I can't verify if anything in those links works, so I would appreciate anyone's feedback after giving it a shot.

Hey, I'm trying to play this ON a windows computer and it's not working! I can't switch between the two at all. I HAVE both of them, so that's not the issue. I mash Ctrl as much as I like, the guy just dies before changing.
Other than that, the controls just feel to sensitive and annoying to me. It would be better if I had a controller to work with.

Also having control issues... Why is there no documentation?

Same issue with being unable to switch between characters...why is it built to by default be used with a controller? That is extremely weird.

Having serious trouble jumping. It lags even though I have it on the lowest quality setting. I haven't even been able to get past the first level because of the part with the three platforms in a row above the lava. I just can't seem to make it. I can randomly get longer jumps if I run for a bit....but is there another method that I'm just somehow missing?

having the same problem. very beautiful looking game, impossible to play. cos apparently there is no documentation anywhere it's even impossible--not difficult, impossible--to figure out whether this needs both a keyboard + a controller to play or whether a keyboard alone suffices. no clue. no idea. cant tell you.

cant rate the game either cos i cant play it. if it makes a difference, yep, i run a mac. i'm not 100% sure, however i dont think thats the issue. too many voices already heard hereupon to think it's merely a problem of platform.

instead it's perplexing, too perplexing to waste a whole lotta mess o' more time w/, in fact. damn.