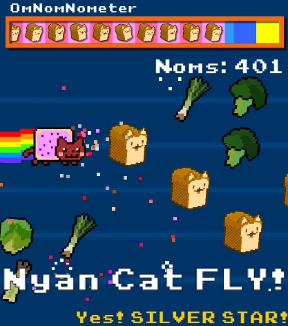 Do you Nyan? You will after playing Krang Games' bizarre and addictive little arcade game Nyan Cat FLY! You may have originally felt the space-faring, rainbow-extruding pop-tart cat's hypnotic pull in a Link Dump Friday article earlier this year, but Nick Yonge, developer, has sent us a batch of special cheat codes that have various strange effects and we wanted to revisit the phenomenon and share them all with you. Why? To celebrate 4 MEEELION PLAYS of the game, and because if my productivity must fall, then so too shall yours.

Controls are simple; use the [arrow] keys to guide Nyan Cat to all the "yummies" (candies and sweets) while avoiding all the vegetables. Fill up your OmNomNometer by eating as many yummies as you can in a row for a bonus, but hit three vegetables and you'll run out of happiness and it's game over for you. Repeat until you get the highest score, or until your significant other screams "I CAN'T TAKE IT" and tries to wrestle the laptop from you in a violent coup to turn off the music.

The Nyan Cat is one of those weird internet cultural things that even Know Your Meme, which I had to consult to write this article, can't make sound coherent, but those who like it embrace it hard. Nyan Cat FLY! is an incredible simple little arcade game that doesn't have a whole lot of depth, but makes up for it with relentless cheer, cuteness, and easy addictive gameplay. The new codes do a variety of things, ranging from reversing the playing field, to putting different costumes on your Nyan, to disabling the rainbow. (BLASPHEMY.) You'll have to be wily and weird to figure them out... or, you know, just check the comments below. There isn't a whole lot to be said about Nyan Cat FLY!; you either love it or you don't, and chances are that by now your mind has been made up. But if you're already on the Nyan Bandwagon, then another excuse to nyannyannyannyan until your eyes glaze over is probably all you needed.

To use:
Type any of the following codes on the keyboard while in any of the game's front-end menus. A notification popup should appear on screen notifying you of a successful cheat input.

There are two types of codes: CHEATS and OUTFITS. CHEATS can be turned on and off, and must be reactivated whenever the player returns to the main menu after a game-over (though will stay activated if selecting Play Again from Game Over). OUTFITS immediately change the appearance of the Nyan Cat itself.

To use:
Type any of the following codes on the keyboard while in any of the game's front-end menus. A notification popup should appear on screen notifying you of a successful cheat input.

There are two types of codes: CHEATS and OUTFITS. CHEATS can be turned on and off, and must be reactivated whenever the player returns to the main menu after a game-over (though will stay activated if selecting Play Again from Game Over). OUTFITS immediately change the appearance of the Nyan Cat itself.

Lately I've been having problems opening spoiler tags, and i would really like to see these cheats. Any help?

when I use funky face, I can't eat anything!not even veggies!

Stephen - right click, View Page Source and ctrl+f "CHEATS", and you'll find it in there. It's not pretty, but it's functional.

Thanks for the help, it worked great!

Stephen, me too. I've always been able to view them before (in google chrome, windows xp), and I've always had javascript enabled, btu for some reason, a few weeks ago they stoppped working for me. I can still view them if I use IE, but that's a hassle :P. For some reason it only seems to be a problem in Chrome, and I'm sure I have everything enabled. (Java seems to work on other sites, but those give me the little option of 'run script y/n' near the address bar. There does not seem to be a way to change this so the scripts run automatically without asking in Chrome.)

Regardless, I didn't even think to check the sourcecode for the text.. thanks to Setia for thinking of that. :)

[If it only seems to be a problem in Chrome for you, and you have Javascript enabled, then it must be something in your browser cache. Spoilers definitely work in Chrome on both Mac OS and Windows 7 (I just retested them to be sure). Try emptying your browser cache and reload the site. Also, Java is not the same thing as Javascript. They are two entirely different technologies. -Jay]

Fyi the way to get rid of the music is to hold shift then press M on your keyboard.

Jay I can use it with Chrome and I'm fine.

I was the significant other in this situation. 'Nuff said.

To make it easier,

use the cheatcode CATBREADFORTHEWIN So you can not be confused with greens and go for beige bread and stars.

i tried the VertigoKitty setting with the TasteTheRainbow setting, and it drove me CRAZY. boy, they weren't kidding when they said 'upside down' -- everything's upside down! up is down and down is up! also my cat was going backwards (TasteTheRainbow) and that just added more chaos to it

but it was fun. xD

ummmmm....question
how do you turn cheats OFF?
i turned on VertigoKitty and now i'm crazy!!

okay, this is getting annoying. i can make my cat do ANYTHING...
but i CAN'T turn on TasteTheRainbow anymore!
any ideas why?

sorry for asking all the weird questions. i answered some myself if anyone else is looking for answers...
you need to turn off the game and turn it back on to reset the cheats. TasteTheRainbow didn't work because it's supposed to be TastINGTheRainbow.
And something else...
Having the ability to turn off the sound should be a cheat code. My signifgant 'other' took over and turned off the sound but quickly turned it back on. I am addicted to Nyan Cat, 'nuff said.

Is there a cheat to turn off the veggies? My Nyan Cat keeps getting killed.

@tim volpe,
I just realized that if you combine those things, the screen is upside-down, the messages are backwards, and there is NO Nyan Cat and NO rainbow. What's the point of ReverseEngineering after that?

How do i get the keyboard to come up? I cant make it jump or anything. Thank you in advance!

how do you access the cheats? i tried using the keyboard and stuff but nothing will work.

Is there any way to turn off CATBREADFORTHEWIN?

Nevermind, It wore off after awhile

there should be a cheat named "BumbleKitty" to make nyan cat look like a bumble-bee.

who ever puts vertigokitty is kind of a derp and dividedbyzero thing does not work for me and tastingtherainbow is fun, i'm just saying what it's like to me

Help! I cant find the thing to type in codes!

@Matthew
There is no place to type it in. You just type in the cheat you want to use on the screen and if it is successful you should see the name of the cheat on the screen

I'd like to bring up this is the first game I ever played on this site. I was actually playing this game on moshi monsters and I saw an ad for this site. I clicked on it and used some of the cheats. I hat a lot of fun and to this day this website is still my favorite online gaming website.

Thank you! :D We love to get comments like this, and it really makes all the effort so worthwhile!