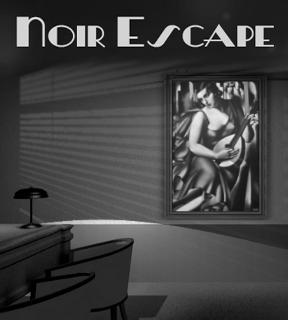 You arrived at his office in the late afternoon. It's not often a private eye gets to investigate a rival. But on the other side of the door, what everyone but you expected happens: you're hit over the head. When you awake, you're trapped inside. Now you must use your wits and detective skills to escape in Noir Escape, a light homage to film noir in an escape game created by Tomislav Podhraski.

As you sleuth out clues and tools, a changing cursor and messaging for every interactive area keeps you in the know. If the scene's a little too noir for your tastes, just click the light icon in the top right corner to brighten it up. Most of the action revolves around discovering useful objects and putting them to use, which is so in character, the fact that there's only one real code to break is easily forgiven. Although you'll probably get out faster than you can ask, "Is that a gun in your pocket, or are you just happy to see me?" While Noir Escape ain't exactly hard boiled, the subtle parody and smooth navigation make this one a keeper.

Walkthrough Noir
How to be a hard-boiled P.I. in ten easy steps

The clue is above the door.

Starting from the center square, follow the arrow pattern above the door:

Well done, detective. You should see your client about this. But first...

Thanks to elle for the walkthrough!

Easily forgiven? I think you mean "manna from heaven". ;) This was cute and I can only wish it were longer.

Walkthrough Noir
How to be a hard-boiled P.I. in ten easy steps

The clue is above the door.

Starting from the center square, follow the arrow pattern above the door:

Well done, detective. You should see your client about this. But first...

Thanks to elle for the walkthrough!

Short and easy. But still fun.

Short, but sweet. Really enjoyed it!

Only snag was the safe code, which I totally over thought and actually had to use the walkthrough for!

5 mushrooms for atmosphere, and the only things I disliked about it are the things I dislike about most escape games (a lack of context/story chief among them). Still, quite a gem.

This was the easiest escape game I've played in a very long time. The only good thing I can say about it was that it had very good atmosphere.

A nicely executed game, but too easy for my liking - if I don't need to consult the walkthrough at least once, it's too easy! :)

I ended up stumping myself because I was overthinking the solutions... totally cute game