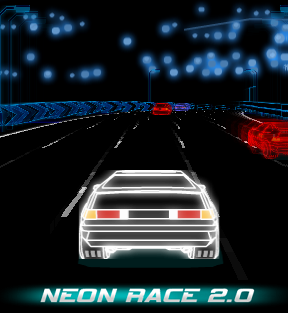 If there's been one genre that needs better representation in flash gaming, it's the forward-scrolling racer. And specific kind too: after all, when you walk out of a dark movie theater and want to drop five bucks in quarters before leaving, you're gonna crave something involving pavement, police cars, turbo-boosts, ramps, and a significant chance of flipping over if you so much as tap a lamppost with your grill. It takes a lot of programming skill to program such an arcade recreation in flash, and when someone pulls it off, like longanimals has with Neon Race 2, it's always worth taking notice.

Like the title would imply, the world of the game is drenched with garish lights, high speeds, and cool wire-frame action. Gameplay is simple, but addictive: go fast, attack enemies, avoid obstacles, win races, purchase upgrades, go faster. It's worth mentioning here that the Prize Money for each race is actually the amount of cash-bonuses on the track, not something you automatically get for victory. Until you pick up on the logic there, you may feel a little short-changed. Minor quibbles aside, Neon Race 2 is fun, pretty, and heart-racing. Plus... there's also a motorcycle. How can you not be on board?

As compared to other racing game this one has very decent maneuverability, good acceleration and the speed was not excessive to the point where you cannot see what is going on.

I think I had more fun playing this than just about any other racing game I have played.

I do have to say one down side, in a few of the levels there were so many blues it was hard to miss them all and I like blue so I may have been aiming at them sometimes without knowing it. Usually you want to avoid red, so the game may have been a bit more playable if they switched the two or let you choose.

I liked the visual of the game and I liked how in the last level you could see through the road so that you knew what was coming up even if you were going up a hill.

All in all a good game.