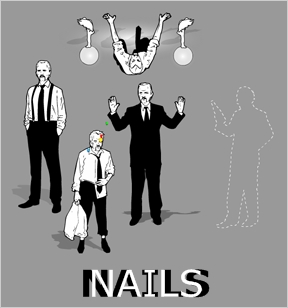 Art used to make sense. Then Picasso started moving body parts around, Jackson Pollock dribbled buckets of paint onto canvases, and Rene Magritte told us, no, this is not a pipe. Ever since, some people have scratched their heads and stared in wonder. Just what do you do with modern art? Maybe you want to poke it and shake it and make it dance like a ferret hopped up on pixie sticks. Well, if you're looking at Nails, a digital composition by Han Hoogerbrugge, you are in luck.

Nails consists of 27 interactive art scenes, typically starring an inked-out Hoogerbrugge wearing a suit and tie. Most begin with the man casually standing on top of the grey background of the page. His hands are in his pockets. Nothing seems out of the ordinary. But when you click or run your mouse across the man, everything takes a turn for the bizarre.

He may split his personality, act out the alphabet on a whim, or jump out of his clothes and hop around in the nude. He might sit on top of the hood of a car and bark like a dog. Ok, to be honest, I don't know if that's a modern art thing, or a guy thing. Whenever you click, be prepared. In Nails, anything from the odd to the obscene can occur. Multiple figures interact in strange and violent fashions. One scene might take inspiration from Nietzsche's philosophy, the next from the Talking Heads.

Speaking of modern rock music mixed with modern art, Hoogerbrugge experience extends beyond his Nails creation. In fact, if you are a fan of the Pet Shop Boys, his work might seem a little familiar. Hoogerbrugge created the animation for their music video, "Love, etc." which was released earlier this year. A few of the animations found in Nails make appearances in the video.

If you can't get enough of this strange artwork, between a music video and these 27 sets of bizarre flash work, don't despair. Don't pull your head off, either—this guy makes it look too easy. While Nails seems to be complete, Hoogerbrugge's inked outline still pops up on a regular basis, in the comic-like ProStress 2.0.

This interactive art may not be suitable for small children. It may neither be appropriate for the easily confused or the easily offended. It may not make sense. But that's what modern art does. So, if you do modern art:

There is this one too, from the same artist
http://ml.hoogerbrugge.com/
that is pretty interresting...

Freaked me the heck out.

I have to say that although I'm a big Hoogebrugge fan in what he's explored for the past decade or so, I thought the Pet Shop Boys video was quite ugly and cumbersome and overall not good.

Having said that I am coming at it from a film/animation/music video point of view rather than an internet artist point of view.

This reminds me a lot of Bill Plympton's animations. They even put out a great, pointless li'l mini-game in the nineties based on one of his animations.

I really enjoy Han Hoogerbrugge's works, I don't usually like modern art but this is so unusual that it always interests me.

Also, sorry about the incessant nagging to review this game. I should suggest games from now on, and leave you guys to do what you're good at - the reviewing...

Wasn't there that one a while back by the same guy that was equally crazy?

This one I think

I think I can say this for a lot of us:

Grosie, Hotel was made by the same person as this. Flow as well.

wow, I liked this one. weird but still cool.

I just find this kinda pointless

I don't know if that guy is crazy, or just very 'creative'.

After I played 005, all I wanted was a bowl of soup with some good friends. Does that make me a bad person?

Ohhh creepy, creepy. Could be life-scarring.