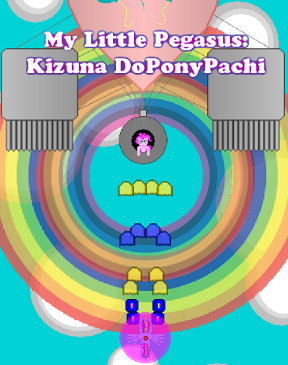 If your typical garden-variety bullet-hell shooter just isn't magical enough for you, then Giest118's free indie download My Little Pegasus - Kizua DoPonyPachi might be just what the doctor ordered. Provided, that is, your doctor is in the habit of prescribing you with aggressively colourful, completely nonsensical games with pony motifs.

Choose from Fluttershy (yay) or Rainbow Dash in your mission to... uh... it's not really made clear, but presumably the angry flowers and eels and such spitting lasers and bullets are a danger to Equestria, so you can probably surmise it's a good idea to put them down. Fluttershy is slower, but has a wider shot range, while Dash is quicker and has a narrower, but more powerful, range of attack. Use the [arrow] keys to steer, and [Z] or [X] to fire. Both pegasi have a special attack you can activate with [C], but be careful; you only have a limited number of these "bombs", and if you don't use them, they can absorb a single hit per bomb for you.

Inspired by Cave's classic arcade shooters and a love of all things pony because why not, My Little Pegasus doesn't make a lot of sense, but it's a surprising amount of fun. The lack of upgrades or power-ups makes this a fairly simple example of the genre, but even if you haven't picked up on the pony phenomenon, it makes a great, exhilarating blast of shooter action for your day. Although... if you don't know ponies, you probably won't get as big a laugh out of stage three's mini-boss. With a snappy soundtrack and bullets galore, this is one fast, fun little trigger-finger exercise. I'm sure you'll be able to handle it. After all... you rock. Woo-hoo!

God, that was hard. Finished it with 3 continues, one for each of the 3 last stages which were so difficult... I'm really not made for danmaku !

Provided, that is, your doctor is in the habit of prescribing you with aggressively colourful, completely nonsensical games with pony motifs.

I don't think LSD is a prescription drug.

Nice game, but from so many bullets, i cant see anything and i always die XD BTW Who is the last boss of the game? Because its too hard for me to reach it.

My biggest issue with this game is that a lot of attacks rely on shooting really fast bullets, which can get pretty cheap considering that they're often fired from fairly low on the screen. Maybe I'm too used to Touhou games.

Also, there are kind of a lot of Fate/Stay Night references.

I just killed Pinkie, the CMC, and Rarity. I'm a terrible pony.