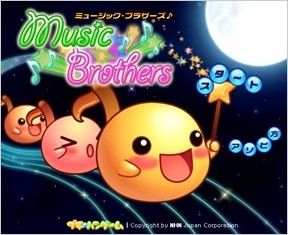 This next game from HanGame is an excellent example of why I am such a great fan of Japanese games. Music Brothers is an enjoyable game, like so many other Japanese games, due to it being cute, creative, and fun.

The object of the game is very simple, and quite addictive. Similar to another music related game, Dance Dance Revolution (DDR), the object of this game is to hit the arrow keys/spacebar in sequence to match the symbols on screen. Unlike DDR, you are timed in Beat Bubbles and you are actually making the music as you go.

To make things more interesting you have a group of little jellies that represent where you are in the line. Each time you make a mistake one of your little guys runs off. If you run out of time, or lose all these bizarrely cute little multicolor jellies, the game is over.

On a few of the levels you will see an arrow inside a slider bar. My first reaction was to hit and hold down the corresponding arrow key; however, for this type you are supposed to repeatedly and rapidly tap the arrow key. Also, randomly thrown in amongst the arrows you have to hit are little blue faces for which you must hit the spacebar. Some of the faces are different, either darker or lighter, and with different expressions. The darker faces are more rare then the normal ones, and when you correctly hit the spacebar for these you are rewarded with a new jelly to join your group. There are also lighter faces with clock hands on them that will boost your time when the spacebar is hit. In addition you can get bonus points for combos that you gain by not making mistakes.

Analysis: This game is, for lack of a better word, very cute. Its graphics show the attention to detail that is typical for Japanese work, and the game overall is fairly addictive as your fingers begin to work faster and the levels become more complicated. My only concern with the game is that the levels do become complicated very quickly. Difficulty ramps up through a combination of longer levels and less time within which to complete them. Other than that minor complaint, I believe the game is great and very appealing to the eye.

There is, however, one other minor catch as there is to the entire HanGame website: It is primarily in Japanese. While the actual game play contains very little Japanese, it is the instructions and menu buttons that may present a language barrier. Here is a little help getting started: The button on top in the main menu is "Start", and the button on bottom is Instructions" (if you hit this one, the start button moves to the bottom right bottom corner). When the game ends another screen will pop up in the game with a girl and four (4) little chicks, as does with all HanGame games. Simply close this window with the "X" in the top left corner. The two buttons that hide behind the pop-up are: "Retry" and "Title Menu," respectively.

All things considered, this is a great game. And one of the best things is that most HanGame games are friendly for all ages and just as addictive to adults as it they are for kids.

A-maze-ing. I simply love this game. I need not say anymore.

Although I am a fan of DDR, dancepad style, I am not as much a fan of DDR type Flash games played at the keyboard.

However, this game changes the monotonous timing aspect that I dislike so much and turns it into a formula that WORKS!

Excellent choice, Jason, and a great job with the review.

I think this game may require Flash 8. All I see for this game is the load screen, and it does not continue past that even after it has finished loading the game.

Hangame Japan is owned by Hangame, which is Korean Company. You can see more games at hangame.com.

This game is two things: Absolutely cute, and addictive. XD Awesome choice for a game review! ^_^

Woaz. SO KUTE! I really suck at it thoughhh u.u

My main problem with Music Brothers is that it is straight from their earlier game called Mystery Pet:
http://www.hangame.co.jp/gamenc/flash_game.asp?gameid=fstpet
I like Pet game more because it has several minigames and as such has more variety.

But like with all games Hangame has released, its quality is amazing. They are always able to make everything from artwork to music to gameplay so well. I suspect its quite a big company seeing how they produce downloadable games and multiplayer games and much more stuff which I sadly dont even understand because of the language.

Somehow I like best their earlier games which are more "crazier".

Oh my gawd, this is such a fun little cute game!! And i juss wanna poke one of those eeny weensy wittle creatures ^^. TY JAY!!! ^_^

It's a lot of fun but two things would make it better, if the controls were a bit more responsive(sometimes it doesn't catch the keys i'm typing) and I think it'd be more interesting to play if the smileys changed as you're going so oh wow you did really bad on that last level so it'll throw in two darks on the next one or you're doing well but going slow so it might give you more time, or to toughen the game by doing the opposite of my examples.

The blue face things mean you need to press space......it took me ages to figure that out!!!

I didnt know that about Hangame being owned by a Korean company, thats good to know thank you Han ^_^

Yea after I played and reviewd this game I was poking around their site and played Mystery Pet for a little that game was fun. I also recommend it for anyone who can navigate the Japanese. Thanks for bringing it up Tonypa.

And yes the key responsiveness was a tiny bit sluggish at times. But the game was too fun and cute for me to really be bothered by it. And honestly, I have a hard time getting past say the 4+ level anyway, so losing just to start over because of unresponsive keys didnt bother me so much. ^_^

I love HanGame, even if now I know it is of Korean origin. With what Japanese I know I can navagate the site enough to enjoy their free flash games, but they also have a section of the site that is run kinda like an RPG in a sense. Where you create and design a little chibby character that is your digital self on their site, and you can buy clothes and a house and all kinds of stuff. But alas that costs actual money, even though its in Yen which most things cost on average less then 1USD. And I dont quite understand as much Japanese as I would need to fully enjoy that section of the site.

wow this gets really hard! or maybe it's just that i really suck

would be sooo much better if there wasn't a sound and an effect (if it was all one sound) the "effects" just screw with the rythm for me.

I think this is the most addictive game I've played in ages; higest score so far is 42230, level 17. I can get to level 14 easily, but that one is SUCH a bear to complete on time...

At last, I cleared the game! 20 levels total, my score came out to 63335. By the time I reached the final level I was in a Music Bros. trance, beginning and finishing the level with one man remaining. This is an insanely addictive game because of its simplicity and the level-based setup, yet the carelessness one often demonstrates while playing such a game provides challenge. The goal of clearing the game is what pushed me to play this long, and now I'm afraid I won't touch it anymore.

I'm scared. I've got totally addicted to this game but today when I go to the link, music brothers doesn't come up. Instead there is a list of other games I can play. Any ideas?

No worries, Celine. A sign on the website appears to say the site will be down for maintenance from 5:00 - 11:00 (Japan time), which is now.

So, I am guessing it's only temporary, so you should check back later. =)

teehee too adorable and i love it when you lose and the little guy gets all mad and squints his eyes.

hey i found a good hint. If you turn the music off you can play better.

Beat the game, score was 64475. it ends at 20. Turn the sound off for better concentration. when you beat it, it says "game clear" and it shows the fat yellow note directing all your pink note friends.

Jay, direct link above no longer works, but I can still get to the game from the site. Just an FYI. Thanks.

Gotta love the Japanese! My new favorite game. Thanks JIG!

So, what does everyone else do when there are enough "down" arrows to scroll the screen right off the page? That's an annoying way to lose - running out of time while you scramble to the mouse to scroll back up!