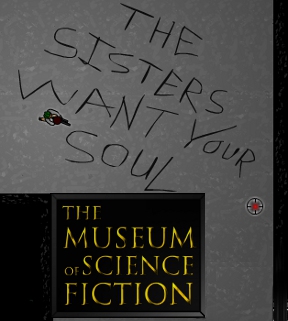 In Museum of Science Fiction, a new top-down horror shooter game from Keith Kong, something is rotten in the state of Denmark. Or, um, Washington, to be more precise. (Kinda.) You were just another tourist, visiting the popular museum, when the next thing you knew you were waking up in the dark, deep underground, and inexplicably armed to the teeth. Where are you? What's going on? Who keeps scribbling you cryptic messages on the floor?! You know that won't was off, right? I just know I'm getting blamed for this.

The goal in each level is to reactive the elevator so you can make your escape. Move your character with [WASD], and aim and shoot with the mouse. Cycle weapons with [E], and place mines with the [spacebar]. Your health is represented in the bottom left corner; when you're feelin' fine and dandy, it glows a healthy green, but take too many hits and it'll begin to turn red. If you avoid taking damage, your health gradually regenerates. You've got three lives per level; die, and you'll be instantly revived where you stand, but if those lives run out, you'll be forced to restart the level... or, uh. Not. If you don't care about your score, you can choose to continue anyway and the game will let you revive as much as you want, at the cost of being unable to gain any points for the rest of the level. 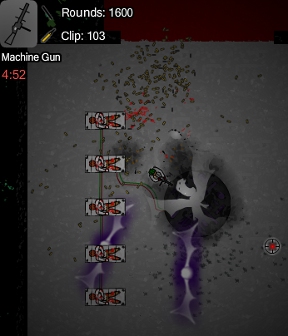 Analysis: Unlike similar titles in the genre, the Museum's strongest point comes from its atmosphere. Despite fairly simplistic visuals, the game does a great job of managing to creep you out with sound, and the scribbled clues can raise the hair on the back of your neck. As you play, you'll discover surviving means utilising your environment and your arsenal to your best advantage. The higher you go, the more the Museum throws at you, from robots who would like nothing better than to exteeerrrrrrminaaaate! you to swooping electric creatures that are invulnerable to traditional means of attack. You'll find creatures that burrow out of the walls, vicious parasites that spring from the remains of fallen enemies, and more. It would all be so wonderful, if not for that stupid elevator.

Repetition is probably the Museum's biggest problem. Trudging through levels to activate an elevator then trudging all the way back while trying not to get your face eaten quickly wears thin. Admittedly the levels do a nice job of providing some distraction, since most of them introduce something new to contend with. Still, the novelty of any stage quickly wears thin once you realise you're just going to have to backtrack to where you started, and it gets especially frustrating when later levels start to feel a bit too much like drawn-out shooter grind-fests in identical corridors. As a result, the last half of the game loses a lot of atmosphere of the first, and the ending feels abrupt and unsatisfying.

While not perfect, Museum of Science Fiction still manages to distinguish itself from the hordes of samey top-down shooters out there. (Although the overall goofy tone of the notes you find does give the impression it's parodying the genre at least to some degree.) Greater variety would have been nice, but the game still accomplishes an impressive amount with very little. Despite not reinventing the genre, it provides a fun, polished experience. Oh, and next time? Do yourself a favour and take the stairs.

Doctor Who Reference GO!
Also, You Can

Dig Through Walls With weapons

Just realised, That should have been DELETE, Dora (again, lol)

WHAT!?! ONE SAID EXTERMINATE! lol.

That's awesome, I was actually at the EMP/SFM in April (Live in the Seattle area anyway. unfortunately, I wasn't kidnapped nor did I have to fight off hordes of stuff.

Damn, The final sister is SMASHING me...

Also, CAN you get to

This is a really good game, just got done playing it :)

well, i i did note 4, but it was behind a plasma shield. lol

I found the "The elevator is turned oonn" a little over the top and quite unneccessary.

We trained them to adapt...we put them among the Amish...and now they want to destroy the creators of technology.

Really? You're right that has to be a parody.

Good game though, and it still manages to be creepy played alone in the dark.

What's strange is that I visited the Science Fiction Museum last summer when I went to Seattle! What's even stranger is that IT'S TRUE IT'S ALL TRUE GOOD GOD GET ME OUT OF HERE

One *huge* feature on this game that I wish all online-action games had: it automatically pauses when your cursor leaves the screen. Very good design decision.

Thanks a lot for the review! You presented exactly what I was going for with this game (an eerie, creepy tone with a parody plot and lots of action). It was a risky match but I couldn't resist mixing my two favorite things.

I'm glad most of you are enjoying the game!

Nice game, but... it's probably just my computer's fault, but sometimes the controls lag, the guy doesn't shoot or he shoots mindlessly in one direction into thin air... obviously a major problen when trying to fend off multiple sawblade-bots.

I wish the game had an level select page...
Ah well lets just play it again!

please someone tell me how to get to b51. Also, epic game like the autoturn off cursor screen thing! 10/10