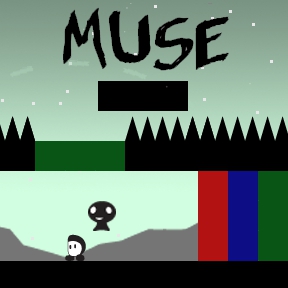 Can you imagine playing Super Mario Bros. without hearing its trademark da-da-da, da-da, daaaaa theme? Or any Final Fantasy game without its epic soundtracks? Music and games often go hand in hand to help set the mood or tell a story, and most casual games have joined their mainstream brethren in featuring original tunes. Recently, to help stress the importance of music in games, Kongregate teamed up with Ubisoft to launch a contest called Project Eden: Experience the Music. The goal was to get developers to create a game that synchronizes music with unique gameplay. Heeding this call was the indie game developer Submu, with their musical platformer called Muse Quest. In order to advance, your character acts as a sort of "muse" to a series of pushable potato heads that resemble Japanese Kodama spirits.

You control your character with the standard [arrow] / [WASD] keys, and eventually collect music notes to get new songs. Once you have these songs, you can play them to create a special "music radius" that affects the potato heads. Your first song (triggered with [X]) makes the potatoes start walking, while the second song (triggered with [C]) gets them jumping. This "muse" mechanic, along with pressing colored switches to remove blocks, leads to some interesting cooperative single-player gameplay with the potato heads.

With its musical theme and cooperative elements, Muse Quest is an interesting game with enough extra personality and uniqueness to help it stand out from standard platformers. Kevin MacLeod's songs are nice, ranging from soft piano music to tribal-like beats and new-age synth, covering for the lack of sound effects. Graphically, Muse Quest presents itself with stark, stylized grey silhouette backgrounds covering a muted landscape. It's effective, though it would have been nice to see more attention paid to the tile-based art throughout the entire game. As a whole, the game experience feels somewhat unfinished, with only 10 fairly brief levels and a few quirks. You have to manually restart if you do something that makes beating a level impossible, and jumping off potato heads to reach higher areas doesn't feel quite as precise as it should. Ultimately, however, the puzzle-like gameplay and enjoyable music trumps most of Muse Quest's faults. As a demonstration of music mixed with platforming, the developers have indeed found their muse, so heed the call and give it a try.

The pictured level has too much of the riding across spikes. It's much too easy to randomly die there.

The execution seems rough to me. The level designs aren't very elegant, the jumping feels floaty, and the song controls are unnecessarily complex. Why can't I just press the same button to turn a song off as I did to start it? Why do I bounce off the Kodamas when just standing on them solidly would be more satisfying?

A tasty idea, but needs to be baked longer.

Riding across the spikes isn't much once you get used to the timing, but the moving platforms in the same level really kills.

Thank you for your insightful commentary on this game. I hadn't thought about the blatant commercial aspect of music as a control device in casual gaming. However, I am a bit confused...I did not come across the point in the game where the protagonist can choose to "accept the paypal." Maybe you are referring to the Kodamas as the "paypals," in which case I accepted them almost every time they were offered - truly an integral part of the game. I also could not find where you are allowed to dress your character in all the different garb you described...perhaps you played this game on a different site that is sponsored by Nike, Ed Hardy, and the like. Yes, bkif8dsa9, it only thanks to commentors like you that we can truly appreciate the hidden undertones in our casual gaming experiences...maybe you try writing your own review?

[I've taken care of the spam comment, but this was just so funny i had to publish it. ~Kero]