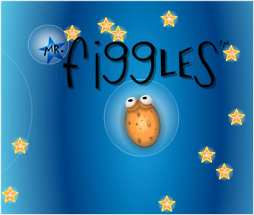 This next game is inherently gratifying to play, and it just feels good even though it's very short. Mr. Figgles is an action arcade game in which the object is simply to collect all the stars on the play field, within the time limit, while avoiding any traps and enemies.

The game comes in two sizes: this free limited Flash version, and a full-sized download for purchase. The free version consists of three (3) levels and a mini-game, and it's all just enough fun for a round of casual gameplay.

Control is entirely mouse driven: just move the mouse to move Mr. Figgles around the play field. A bit of inertia keeps the little guy from keeping up with the cursor, and that is where the fun begins. Try it and you'll see what I'm talking about: It's something that you have to feel to understand.

Between each level you may spend the stars you collect on power-ups, such as to increase Mr. Figgle's speed or size, though the items you may buy are very limited in this free version. And if you don't have enough stars to purchase an upgrade, you can try your luck with the slot machine mini-game to win extra stars. I found the slot machine to be a fun game by itself.

Published by HandY Interactive, Mr. Figgles is an odd name for a very familiar game concept. The core gameplay mechanic of the game has origins that date back to 1988 with Patrick Buckland's original black-and-white shareware game for the Macintosh, Crystal Raider, which was updated and released one year later as the Mac's first color game, Crystal Quest, published by Casady and Greene. I used to play Crystal Raider, and then Crystal Quest, for hours at a time. They are on my all-time favorite games list, and this Flash game is reminiscent of the fun I used to have.

Windows:
Download the free demo
Get the full version

Alright but I was hoping it was longer. BOO

Besides, it's the gameplay around here that makes me excited, and this particular game plays very similar to a game that I have been building myself. Since I had spent so many hours playing, and loving, Crystal Quest on my Mac II, I wanted to remake the experience with my own interpretation.

The fact that you were "hoping it was longer" tells me that I am correct about its gameplay. =)

Tough one with a mouse pad. At least that is what I will blame my ineptness upon.

Im not sure if something is broken or this thing just gives a really big time bonus, but its been going for about 3 minutes now

Shane - lol. You came upon the same bug that I did. If you finish the level JUST as the timer is depleted, you will get both the "level complete" and the "out of time" screens. The bonus will then count up forever. Some would say that's a feature, not a bug. =p

I think the full version is free now.

I believe the full version is free for an hour, but then you much purchase the game if you wish to continue playing.

That's the way most downloadable games work these days.

Plus, downloads are generally available only for Windows-based computers, which is disappointing but necessary to support the e-commerce mechanism.

Theres another bug actually. You can earn infinite stars right from the get-go.

Once you start the slots mini-game, you can take whatever money you bet back before the slots finish and it still rewards you for whatever you would have bid.

Fun but my cursor kept getting stuck on the edges of the arena. Rather annoying problem. But, besides that, it was fun!

Unfortunately, Kim, that's a problem with Flash. Anytime the mouse cursor is moved outside the area of the "stage", Flash stops receiving mouse events from the OS.