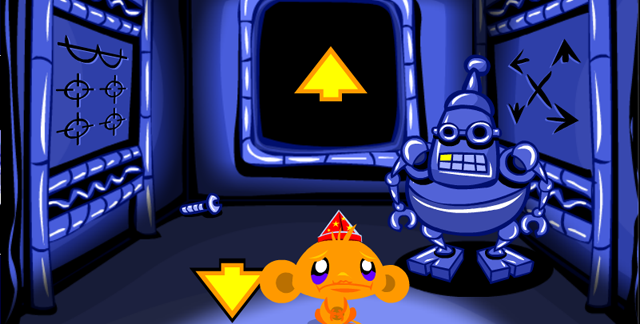 Just in case you haven't had enough beloved monkey in your life recently, now is a prime-(ate) time for more! This time, the adorable monkey's tears spill for it is lost in a complicated maze. A map hangs on the wall of your starting point, indicating several rooms marked with letters like "S" and "Q." As you start to trek through the rooms, wondering what those strange markings on some of the walls in seemingly random places are all about, it's hard not to notice that the place has a few screws loose - quite literally! You'll have to track down all the missing parts that PencilKids has hidden - quite cleverly at times! - throughout the scenery and attempt some repairs to make the monkey GO happy!

As usual, only the mouse is required for the game. You'll use the big yellow arrows to travel from one room in the maze to the next, and you'll find maps hanging in the occasional room conveniently pointing out your current position to assist you in navigating. Your inventory is accessible from the backpack icon on the top-right corner of your screen, and it is from here that you can find the various objects that you find and pick up. Tap one of them from the backpack to use it on an area somewhere on the screen, and use the combine items button if you find two that you think might fit together. So what are you waiting for - go help out your best monkey friend!

Doing some walkthroughs for the past two weeks of games.

The game helpfully gives you a map, but you'll want to have pen and paper to keep track of everything.

Pick up the Mini Monkey and screw from the ground, and head to the room on the left which has a helpful map of the whole maze.

Move left, back all the way, and then right through the starting room to the second map room. Pick up a screw from it.
Move right to a room with a sparking rectangular socket, and pick up the (well-hidden) screw on the left doorframe.
Move forward to another map room with a device marked A, as well as a Mini Monkey, screw and wheel.
Move left to the Q room, and take the screw on the wall.
Backtrack to the starting room (and check that you have a total of 11 screws, 3 monkeys and 2 wheels).

Backtrack to the last room on the map (marked with four dots), which has four round things protruding from the wall, as well as a device missing a handle next to the trapdoor on the floor. Pick up the screw on the floor (and check that you have a total of 23 screws, 4 monkeys and 4 wheels).

Use all 4 wheels on the wall in the four-dot room, and use the clues throughout the maze to unlock the letter walls.

Move right and down to find the clue for X (left, up, down, right). Following that clue, you should click the wheels to point in the
←↑
↓→
directions, and then proceed to the X room to pull its lever.

Inside, there's a rectangular fuse, a screw and a Mini Monkey.

So adjust the wheels accordingly and pull the lever in the S room to get the screw, round pipe piece and Mini Monkey.

The room next to it has the Q clue:
V>
<^
and opening the Q room gets you a screw, pipe piece and Mini Monkey.

You also spot the H clue near the map room:
^V
><
and opening the H room gets you a screw, round fuse and Mini Monkey.

Moving right from the H room, fix the broken pipe by using a piece on it, and a panel on the right opens up, revealing a screw.

Then make your way towards the X room and fix the other pipe to get another screw.

Then go back (south) twice and use the round fuse on the socket to get another screw.

Then go right all the way and fix the other socket to get the last screw.

Now that you have 31 screws, use them on the robot in the room just ahead of the starting one.

He walks away leaving a button (that looks more like a knob) behind.

Use the button on the hole along the H path, and use two other clues in the maze to figure out how to activate it.

The same turned-B marking appears over four crossed circle symbols, and a clue along the H path tells you that those symbols mean S.

In this case, S stands for South, so you should make each of the four wheels point down.

Then click the button/knob to turn it. The panel opens up so you can take a lever, two wheels with lit quadrants and a Mini Monkey.

Use the quadrant wheels on the A and B devices (along the Q and H paths), and use the clues from the maze to turn them correctly.

According to the clue along the X path, the A and B wheels should be lit in the upper-right and lower-left.

So click the A wheel once and the B wheel thrice to rotate them into place.

We're not done with this puzzle yet! Use the lever on the device in the wheel (four-dots) room, and then use the clues from the maze to turn those four wheels correctly.

According to the clue in the S room, the four crossed squares on the wall each signify N.

So turn the wheels to point North, or up.

Then push the lever to open the trapdoor. A (different) robot pops up, ending the game. But you can still pick up the last Mini Monkey next to him before moving on.