Do you ever stare at your iPhone or Android phone and just ask it what the heck it thinks it's doing? Sitting there, sucking power out of the battery, awaiting your commands like some sort of obedient machine. And then, when you're playing a game and suddenly fail, why it made you do that? Because you totally had the skills to pull that jump off, it was your phone's fault you missed it. Your phone's fault... 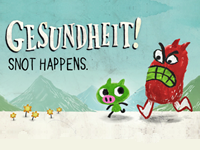 Get it while it's FREE! - If you've been visiting here a long time then you'll remember Matt Hammill's art style as well as his delightful (if a little gross) action puzzle game, Gesundheit. Back in 2005 when we reviewed the game it was available only as a Windows download. Since then Matt worked with Revolutionary Concepts to port the game to iOS, and it's better than ever! In fact, it's been such an award-winning success that Apple has made it the Free App of the Week (choose between the iPhone or iPad HD version)! For the low, low cost of FREE, this game can be yours to enjoy all over again. And it works extremely well with a touch screen interface. Be sure to get it quick, though, because the Free App of the Week changes soon!

Put a little Kairo in your hands - Plenty of people have been getting their heads in a twist trying to solve the immaculately sculpted puzzles in Kairo, a 3D minimalist adventure game from Richard Perrin. As if exploring the game's spartan rooms and surreal stages from the comfort of your own home wasn't enough, Kairo is now available as a universal app for iOS devices. No fast reflexes or trigger-happy thumbs required, just an honest sense of curiosity and a willingness to sit and scratch your head for a bit. Of course, you could always consult our handy Kairo walkthrough for a little help!

Dungelot for free, update coming soon - Still playing Dungelot? Us, too! The game just recently exploded across browser, Android and iOS platforms, but now news has trickled through that an update is coming very soon which updates and adds several things, the most exciting of which is a new inventory system and a new character, the Alchemist! iOS owners also take note that Dungelot will be free for a day or two, so even if you were on the fence about it, grab it now while the grabbin's good.

Rail-mounted gun systems are cool - Pesky liquid masses spreading through the ship. Sometimes I wish we could just mount a gun on a rail system and use it to keep everything clear. Oh wait, I think I just had an idea! An in-dev game from Screen Department, the upcoming iOS release Stingout is one part defense, one part arcade, but even more parts cool. Gameplay proceeds as described, with plenty of power-ups and a lot of twists to keep things active. Even more exciting is the game is promised to be free from in-game currencies/purchases!

Pixel Defenders plus 0.1 - The matching and merging puzzle defense game Pixel Defenders has been updated to version 1.1, but behind that seemingly small increase hides a host of cozy improvements that players have been asking for. To start with, never-ending assault mode has been added, as well as support for larger screen sizes on iPhone 5 and the newest iPad. Tutorials have been trimmed, Game Center support has been added (with achievements!), and a handful of other issues have been tinkered with to provide a more balanced experience. It's great when a development team has both the will and the ability to respond to player feedback, and we're ready to give Social Titans a really big hug for their efforts.

Aahh.. Nothing for Android this week :(