Here's something to mull over as your workweek begins: Don't Look Back, a free mobile release from Terry Cavanagh, does exactly what its name forbids by being a port of a 2009 browser game. Granny Smith is both a granny and a member of the Smith family, whereas Star Command actually lets you command stars—wait, it's a starship commanding game? Oh. Well. Then. Nevermind!

Star Command: such a tease - Star Command, the isometric simulation that is practically guaranteed to be your favorite game of all time once it releases later this year (we hope) recently wheeled around for another teaser, this time unleashing a 13 minute long video packed with gameplay! Narrated by Jordan and Justin Coombs, two of the game's developers (with the main programmer still chained in the basement), the video outlines the start of a game along with a few high gameplay high points. Just enough info to make you want it even more! 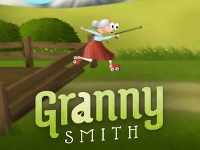 Granny Smith goes to space - If you're still having as much fun with the racing/stunt game Granny Smith (which is available for both iOS and Android, by the way), you'll be pleased to know the game recently received an update that added new levels set in outer space. Then, another update hit that made said levels a easier to complete! It seems the majority of players thought the stages were a bit too difficult, so developer Mediocre toned them down. Either way, more apple collecting with granny on skates is a good thing.

Don't Look Back looks back - With the recent success of Super Hexagon, Terry Cavanagh seems to have caught the mobile bug. In lieu of porting VVVVVV to iOS (which is his next project), Terry has released a mobile version of Don't Look Back, a semi-surreal narrative game from 2009. Even better, the game is completely free, works on Android and iOS devices, and plays just as well with a touch screen as with a mouse and keyboard!

And as for Don't Look Back - it's not only for iPads, it's also for Android devices, available from Google Play :D

So it is! I checked yesterday but didn't see it. Now I realize it was hidden past the page break. Glad Google didn't reject it at first (like Apple did) because the description touts the lack of IAPs!

I can't wait to name my ship...Serenity.