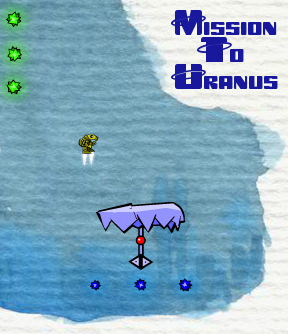 Let's talk about Uranus. We can tell from the satellite pictures we have of Uranus, that Uranus is large, gassy, and rotates on a funny tilt. Uranus has only been probed by NASA once, in 1986, and found Uranus to be calm and featureless. But now, gamers everywhere will be exploring Uranus in Pastel Games new Lunar Lander styled physics arcade game: Mission To Uranus.

Seriously though, safely rocketing from Point A to Point B is a tried-and-true premise, and Mission to Uranus does nothing to mess it up. Add to that the evocative landscapes, and the one-button mouse controls which combine perfectly with the well-composed levels, and you're in for a nice time. Be warned, however: your rocket is amazingly touchy to maneuver, and the landing platforms aren't at all forgiving. However, while your skill and patience will be tested, a safe landing is always satisfying. Just be sure to stock up on fuel in early levels, so you don't crash down the line. Uranus has enough debris as it is.

Dull and repetitive. With a control scheme which is, well, less then stellar to put it mildly.

Since the only challenge is trying to not run out of gas whose amount carries over to the next level, and since there's no way to know what awaits you in the latter levels, I felt no motivation to be collecting points and risk starting over again from scratch. So in the end everything boiled down to plowing through a series of unremarkable levels until the game decides it's enough. Thankfully it doesn't take too long to reach that point, which I guess is one of the few pluses I can give it.

Fix the control scheme so the lateral movement has a limit, get more inspired with your level design and for Pete's sake get rid of the irritating gas mechanic and make each level a self-contained challenge. I'm pretty sure this would improve the game tenfold.