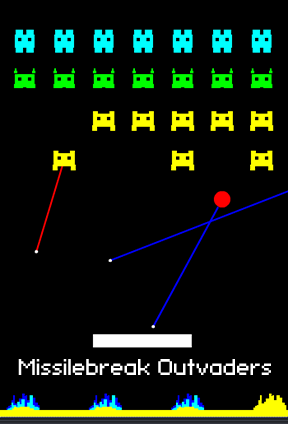 Space Invaders, Breakout and Missile Command are like the venerable elder statesmen of video games. But what if hundreds or thousands of years in the future, scientists are picking through a then-ancient landfill of Atari 2600 cartridges and have to try to piece together what they mean? They might come up with something very much like the arcade mash-up Missilebreak Outvaders, the work of Nathan McCoy and Jonathan S. Fox.

Just move the mouse to control the paddle. The aliens progress back and forth and slowly downwards, shooting missiles at you and attempting to get your six cities, but you can bat their projectiles back at them with the paddle. Projectiles are red as they approach you, and turn blue after they've hit your paddle once. You can explode the blue projectiles at any time by clicking the left mouse button. [Space] or [P] pauses. The game ends when you lose all six cities, but you have until the end of the current wave, because at certain score markers, you can rebuild a city. Go as long as you can.

Missilebreak Outvaders is a throwback to the era in which games were actually hard, designed to suck the quarters from your pockets with every death. The "doomsday theory" mode is particularly punishing, but even the normal game gets intense quickly. There's a surprising amount of strategy to be had, hinging primarily on if and when to manually explode projectiles. But at some point all strategy will probably fly out the window as you frantically whip the cursor back and forth screaming "Make it stop! Make it stop!" And perhaps you will look out said window and realize it is dawn. And it will have been worth it. A classic example where the whole is greater than the sum of its parts, with three classic arcade games rolled up into one awesome experience that is exceptionally fun to play.

For those interested in the music, Nathan wrote the music himself and it's available on his Bandcamp page.

This looks like fun, but seems to have a bug. After I finish the first wave, it just freezes.

[Try updating your Flash Player. It's not freezing for me. -Jay]

How do I see the medals/achievements I've earned so far?

[You'll have to play on Newgrounds to see the achievements you've earned. -Jay]

This is a devilish little title.

The gameplay is solid as they come. The visuals are exactly what they need to be. There are a few moments for gamer quips, like "Oh come on, this paddle is too small" or "Oh wait, I have to detonate all my missiles before this wave can end?" But those are part of the learning curve rather than design flaws, especially once you realize the rationale behind design choices. For example, it is important that you detonate your missiles at the end of a wave BEFORE they decimate your cities through sheer negligence.

What makes the game for me, however, is the sound design. The first four notes of Space Invaders homage is familiar but fresh and full of the right kind of funky attitude. While the explosions are... explosions, the ball hits are all in the tonic of the song, giving every bounce a stable relationship to the song. There is genius behind this design: while every bounce on a wall or an enemy will give a higher tonic pitch, every bounce off the paddle (and therefore every successful action by the player) gives a lower, more grounded tonic. Each player bounce is given an amazing, stable, even causal relationship to the music, because it's the player that provides the resolution to the song's infinitely cadential progression.

It's a very slick game, but the learning curve gets steep quickly. I advise judicious pre-emptive detonation rather than reflexive detonation. It hurts more when you see the blue streak kill your citizens.

Surprisingly, I've enjoyed this more than practically all other games I've seen here in the past year. It's outstanding.

...just one thought after some more time with the game.

An old school High Score table might be nice.

Shouldn't the missiles appear blue as they're approaching you and red as they move away? It isn't very helpful to have them change color just because they hit the paddle if they're equally dangerous after they do. Instead of having to defend against both red and blue missiles, I could focus on just the blue ones if their color was based on the direction they're moving (or even better, their velocity!)

Truly great idea backed by great execution. This would surely have been a classic back in the day.

Well done to the creator!

mscaa:
How would we tell if we can explode them manually?

@troas: I just played up through wave 3 in Chrome (Mac OS) Flash version 11.0.1.152 without any issue. Have you tried a different browser?

The thing that happens on your first play through at the end of Wave 1 is you get a pop-up achievement notification. My guess is that pop-up (in-game) is what's causing the issue, but I'm not sure what to suggest for a workaround.

64 bit windows 7 here. I've played through the first level in Chrome, Firefox, and IE8. I installed Opera and it still hangs at the end of the first level. I also tried running it in IE8 with the popup blocker disabled - it still hangs. Perhaps there is an issue with 64 bit OS?

Besides the game, anyone knows the details of that music?

Hi! Creator of the game here. Glad you all like it! I wrote the music myself; it's available on my Bandcamp page. (I hope this doesn't count as advertising.)

[This kind of link is definitely allowed. We're happy to help support the developers here at JIG. :) I'll even add it to the review above. -Jay]

I have more fun with this game that I have thought I would. Thing gets intense quickly and I'm fine with it. nice game.

It's a good concept and fun to play, but the only suggestion I have is to implement some kind of automatic pause if the mouse cursor is moved outside the game's bounding box. Also, you should implement something where pause/unpause can only be done with the spacebar, because if you click to unpause, the "paddle" jerks to the position of the cursor.

More fun than expected! I like that it's hard, but never feels unfair. Being able to deflect missiles at the last moment with the vertical sides of your paddle is kind of awesome.

Anyone else notice that they sneaked a fourth addictive game into the mash-up? Check out that chain reaction action.

Watching the enemies decimate their own ranks by firing into an ongoing explosion is so satisfying (and gets better at later levels).